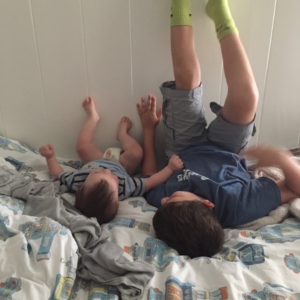 Almost every night, without fail, about 45 seconds after I walk out of Jonah’s room and finally sit down on my bed with the loudest internal “Ahhh,” he calls me.

“Mommmmmmmy.” Trying to summon every ounce of patience I have left, I tiptoe down the hallway quickly so as to not waking his sleeping baby brother right next door. Except as you may recall from several other posts, our floors seemed to have been transported from the Little House on the Prairie and they creak as if Pa is a’comin.

Usually, it’s a “can I have water, it’s too hot, why is the sky blue, can you pleeeease consider buying me my own iPhone soon. Zach is getting one…” (Almost every night my last words are something to the effect of “I don’t care what Zach is getting. It’s time to go to sleep.” Only I say it a little nicer than that. Okay, fine. I don’t say it nicely. I totally say Zach can go eff himself (with my tone)… and tell him to go to sleep, kiss his head and dare to walk out the door.

However, this “Mommmmmy, one more thing” dance goes on a few more times, until I finally do get back into my room and try to pick up where Peter and I left off in our conversation, which usually never happens because talking is literally a struggle and basically nonsensical. So we twitter/instagram/facebook/and even stare into space. Because brains are dead and mommy go night night.

Except tonight. Tonight the Mommmmmy cry didn’t leave me exasperated or annoyed.

Just as I sat down on the bed, he called me back in. His voice sounded different.

“Mom, what happens after you die?” he asked tearfully. Oh, jeez. We’ve had the life and death and even the where do babies come from talk. But it’s never easy and now he’s older and—

“Is there just black?” he continues.  “Like is it even possible that you still SEE things or hear things?”

“I- I – think it’s possible, yes. Your spirit and soul always lives on because you go to heaven.”

“But what if it’s not true?” He’s starting to sob. I hold him tight and tell him it’s okay. But I actually am not certain it is.

“Of course it’s true. You know how doctors study medicine for years and years to become doctors? Well, Rabbis and Priests do the same thing with religion. They study the Bible and Torah and then they are experts. That’s why there’s so much art like the ceilings I saw in Italy, with depiction of heaven, and….” I’m not making sense. (Although, it’s not the worst explanation in the world, if I do say so myself).

He’s sobbing. Is he overtired? Was it the fact that, right before bed, I told him it was his fault he left out his Pokemon cards and Oliver ripped them (and maybe took it inot the bath with him… because I didn’t stop him. Insert the “uh oh” emoji here).

“But you don’t actually KNOW. You don’t KNOW what happens when we die.”

“SEE!” He sobs into my chest. I am speechless and can only rock him and tell him it’s going to be okay.

“Are you worried something is going to happen to me… or someone in your family?”

“No, I don’t think so. This is just bothering me lately. Not knowing what it looks or feels like when you’re dead.”

“I wish I had the answer… but luckily, I’ve never died, you know,” I say, trying to joke again. He doesn’t think it’s funny. He cries more.

I hold him and tell him to think about baseball and cool cars, chocolate candy and amusement parks, funny YouTube videos and loud farts. It calms him down a bit but I can hear his mind racing. I know, because at the age of 9, my brain raced that fast and loud too. It still does… But tonight, the wine at dinner (and daily Lexapro, if I’m being honest) helps me to coast into neutral…

“I hate not knowing, Mommy. I wish someone could tell us.”

“I do too. But then you would always know… So maybe it’s better to just trust and enjoy life and be grateful for all the blessings… Think about all the great things and focus on that. You’re luck.”

“Well, maybe I am sometimes… because I’m always asking for stuff?”

“I’ll try to be more grateful.”

“That can never hurt.”

He takes a deep breath. “I think I feel a little better.”

I give him a few more kisses as he closes his eyes… Eventually, he tells me to go, that I’m crushing him and starting to snore, (you try staying awake after a long day, snuggled against a lump of yummy in a soft bed of robot sheets and probably lots of boogers). I make my way back into my room… a little sad and like him, a little worried. I don’t have all the answers and I too wish I knew what was going to happen and how long we had to enjoy all of this messy stuff.

Don’t really have a wrap up, nice little button to end this post… So I’m sharing a video of my monkey man from 5 years ago… He was just 4. The Peter he is talking about is of course, my Peter, his stepdad. Turns out, Peter, like Jonah, is pretty special and  “partic-liar…” too.

Signs of a Good Date