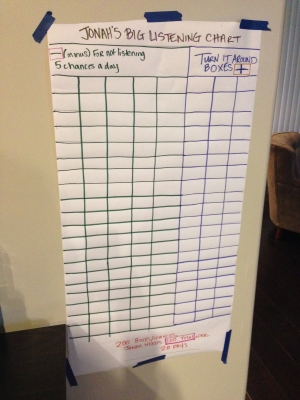 Me: Why do you need one?

J: Because I promised *Leo I’d give him a dollar.

Me: Um. Why did you promise Leo you’d give him a dollar?

J: Because he let me cut in line. So I told him I’d give him a dollar.

He puts his hand out. I stared at him blankly.

Was this conversation really happening? When did he get to be a full-fledged kid ensued in  playground bribery? Are these kind of exchanges between boys common, I wondered? When I was 6, the sh*t talking and drama was confined to who could do the best routine to Wham and for making fun of the girls who actually kept names given on the Cabbage Patch Dolls Adoption papers. Like, duh. No one does that. Tiffany is soooo much better than Laraine Cammie.

Totally at a loss (for the obvious response: “NO”), I called Jonah’s dad and quickly told him what he said. “Tell him no. We don’t bribe.” Right. Duh. Of course. (Men really keep things so simple, don’t they?)

I marched back into the living room and ushered him to the door to start our walk to school.

Me: Jonah, no. There are couple of reasons I can’t give you the dollar. For starters, children at your school are not allowed to carry or exchange money. (Full disclosure: I have no idea if this is true, but I feel like it could be). And two, we don’t bribe our friends. Do you know what “bribery” is?

Me: It means that you are paying someone to do something that they don’t want to our don’t have to do.

Me: No, you’re not in trouble. But we don’t pay people to do stuff for us that they shouldn’t have to do or that breaks the rules – like cutting.

The conversation continued… I wanted to say “f**k Leo. Would it have killed him to let you cut?” but instead I encouraged him to just be an honest person, blah blah blah, good parent speech, blah blah, be a kind friend, blah blah blah, yes, you can have cheese-it’s after school, I’m still not giving you a dollar, blah blah blah, oh, look, that’s the bell!

In other related- not so- related news, I’ve decided it’s time to get back to incentivizing. I’ve created a chart for good listening. I’d explain how the chart works, but frankly, I’ve come up with the most complicated system that I can barely understand it. All I know is that he gets 5 chances a day (for bad “decisions” or bad “listening”) and 3 chances to “turn it around.” There’s a total of 100 boxes over 20 days. He needs to have 60 boxes unchecked by the end of the month. Or something like that.

Anyway, the prize for “jonah’s chart of good listening” is a sleepover at our house with some of his friends. Where he gets to stay up late. Eat popcorn. Watch a scary movie. Wake up at 4am. Eat whatever they want. Say a bad word. Play video games. With 4 new controllers.

Sure… all sounds good to me. In fact, we’re on day 3 of charting and the kid jumps when I say “jump” and is working hard to razzle-dazzle me with his, “Sure, Mommy!”  Well, don’t tell him, but it turns out “reinforcing positive behavior” is really the ticket to success with my kid… Or as we called it on my playground, bribery.

WORKING MOM: WHAT I DO

I SHOULD KNOW MORE