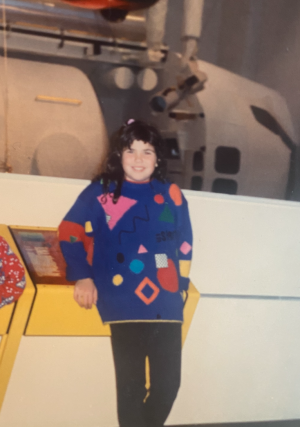 When I was in 4th grade, in addition to thinking that Corey Haim and I would one day meet and fall in love, I considered myself to have a very keen sense of style (as exhibited by that darling get up on your left here). I just knew what was in and I knew what I liked. Luckily for me, the stir-up leggings, pushy socks, and over-sized sweatshirts splattered with neon paint look suited my twice baked potato like figure. Oh, if only the Gen Z fashion dictators of today’s world had any respect for thin-legged-bloated-tummy girls like me… But in 1985, I had the potential to be totally rad. And one day, I decided that I was going to take my radness to the next level and wear a WAFFLE KNIT legging to school. To be clear, these waffle knit “leggings” were not like the waffle knit material you’d pay $250 on Shopbop for. No. These “leggings” were in fact THERMAL PAJAMAS. Remember those? Yes? Before some marketing genius decided to call it “Loungewear” and suggest to exhausted mothers across America that if you just match your Thermal Pajama Pullover with your bottom Thermal Pajama Jogger,  you will look pulled together and happy to be telling your toddler for the 65th time that they may not have another popsicle until they eat one pea. ONE GODDAMN PEA. IS THAT SO FUCKING HARD?!

Thermal Pajamas. So here I was, one sunny, pre-pubescent day circa 1985… I had just slept in my thermal pajamas that had been purchased as actual winter undergarments for when we visited our cousins in Chicago. Although I had a perfectly acceptable pair of pants to wear that day for our recess rehearsal of “Hungry Life a Wolf” routine (being allowed to dance in this routine by the popular girls assured me that I was on the path to one day to kissing a real boy on the real lips), I decided maybe I should step out of my Esprit comfort zone and start a new trend: THERMAL UNDERWEAR – or as I saw it: Leggings with TEXTURE…. Ta da!

“Honey, you’re wearing your pajamas to school?,” my Mom said with a tone that was way more complicated than that sentence looks. (But I’m not sure how to sum up ones 44 years of single mother/daughter experience in one sentence if you know what I mean).

“I wear them to sleep. But they’re not pajamas,” I defended.

“Well, they are thermal underwear technically. Like meant for under clothes.”

“But they’re your pajamas, Jenny.”

“Nobody knows they’re my pajamas. They don’t know what I sleep in.” DUH.

She gently criticized, er, discouraged this a little more. But my confidence in my fashion choice far outweighed the disapproval and fear I saw in her. What was there to fear anyway? So what if they’re pajamas? They have TEXTURE. They’re pale pink. They’re different and it’s okay to be different, a little, sometimes, right??? RIGHT?? 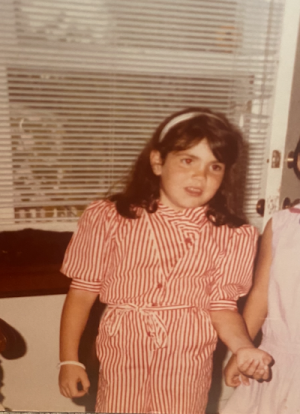 Halfway through our recess “Hungry Like a Wolf” routine, Roni, our ring leader told us she had new choreography she wanted to add. It was too late though, the bell rang and recess was over. As I hopped down from the bench, Daryl, a boy in my grade that dangled somewhere between Duran Duran routines with the girls and hoops at recess with the boys, walked by me and sneered,  “Nice pajamas, Jenny B.” (Btw, you never left out the last initial in the 80’s for any Jenny, Jennifer, or Julie).

“They’re not pajamas. They’re waffle knit leggings.” I would never reveal that they were actually in fact thermal underwear. They would never know the truth anyway. THEY don’t go to Chicago in the winter to visit cousins. THEY don’t know. Fuck Daryl.

“They look like pajamas,” Daryl laughed, which soon lead to others laughing.

“Oh my god, Jenny!!! You wore pajamas to school???” Now my dance squad was laughing. They no longer saw a chic back up dancer (will I ever be a lead?), they saw little girl pajamas. I WAS WEARING FUCKING PAJAMAS TO SCHOOL and there was no escaping.

For the rest of the day I felt naked, like those bad dreams where you’re standing in the middle of the store, school, work etc.  naked and everyone sees you. That was me. Naked, in thermal underwear pajamas and scrunchy socks. Any chances of a solo in our upcoming Wham routine was over as was the chances of ever being touched by a human boy. I screwed it all up. I will never believe in myself again. I will always care what other people think only. Especially my Mom. She always goddamn knows.

“How was school,” she asked.

“Daryl knew they were pajamas. They laughed at me.”

“I told you, honey” she said lightly.  (But, like I said, I’m not sure how to sum up ones 44 years of single mother/daughter experience in one sentence, if you know what I mean).

A few weeks ago, my mom, mother in-law and I gathered in my backyard for our bi-weekly mani/ pedi date. This is a new “joy” from the pandemic, if you will… an absolute luxury… And certainly, one that does not go unacknowledged and is stored in the “Thank God for this (1st world problem)” vault. Usually, our mani/pedi party is done during the morning – while the littles are at school and I can enjoy my cuticle cut with without a child begging me for a snack or a wifi code. One particular day, our appointment had to take place while the boys were home… Typically, my kids RUN when they see a nail cutter. They are TERRIFIED of having their nails cut. I’m fairly sure this is because I’m a) terrible at cutting their nails b) panic when I have to cut nails c) shouldn’t be allowed to cut anyone’s nails, and they sense this all. For whatever reason, on this day, when they saw us doing it and wanted IN.

“Mommy, can I have color on my nails?” Oliver said.

“You guys want polish like mommy… on your nails?”

I gave my mom and MIL a shrug returned by a shrug that in ancient Judaism means, “Give him vat he vants.”

And then I said what my Gen X, baby wearing, VBAC giving, doula paying, avoid GMOs, parenting classes, gut instinct, advised me never to say: “Are you sure you want PINK?”

I gave my mom and MIL another shrug this time deep from the Shtetl and they shrugged back, “So vat? Pink, shmink. Give him VAT HE VANTS.”

I immediately run upstairs and in to Peter’s office. He’s on a zoom but this is urgent. He gives me a wtf look then excuses himself from the call. I tell him what is happening.

“Oliver and Everett want a manicure.”

“But Everett wants Blue. With sparkles.”

“I mean Everett can have blue but Oliver can’t have pink,” he turned to get back on to his call.

“What??? That’s ridiculous. Of course he can have pink. You’re wearing a pink golf shirt right now?” My blood and brain are starting to come back to my fight for social injustice, I am woman hear me roar, body.

“Then why are you telling me this?”

WHY AM I TELLING HIM THIS, I think as I race back out the door like people that scream WHY ARE YOU YELLING when you’re the one yelling (I’m always the one yelling).

I run outside as Oliver and Everett sit down in front of the manicurist more patiently and intently than I have ever seen in my life.

Oliver asks her another 35 times if she will do pink AS she’s doing pink. She says, “Sure! I’ll do pink.”

I give my Mom and Mother in-Law another shrug that the Torah refers to as “I should get over it right?” They nod in a way my ancestry tells me means, “Yes, get over it. It’s just a color.” 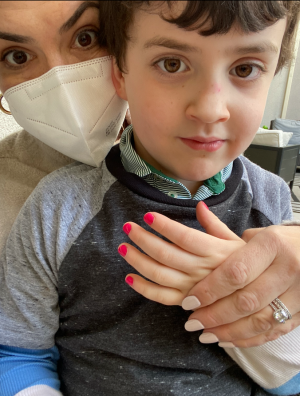 I remember that one day in 1985 I loved my waffle knit -okay, fine- goddamn THERMAL UNDERWEAR so much, I had to wear them to school. And in those days, mothers didn’t know (like I know thanks to endless amounts of therapy and social media to really make you feel inadequate) that you DO NOT stop your child from wanting to express themselves in the most harmless, inconsequential yet, identity affirming way. You don’t stop them from choosing a color or an outfit, just because you think it’s not what other people will like or approve of. You know better. You know this is a benign moment and has zero meaning other than the fact he likes pink because it’s a fucking pretty color and color has no deep, biblical, earth shattering meaning except for what your eyes are seeing… and ONLY what your brain has been conditioned to understand it means. You know this because you are 44 fucking years old and listen to podcasts and recycle when you can. You know this because you’re not woke, but you’re not a complete dumb ass either.

And even though you want (and continue to this day) to tell everyone and anyone you see that may or may not even look at this child’s hands that he “Ha! Wanted pink!” Don’t judge me, or him kind of way, you know that apologizing for the spirit your child has and his commitment to the color pink, along with a collared shirt he insists on wearing almost every day, is really unnecessary. You know you do not need to apologize for his fashion choices. Maybe, just maybe, he sees “texture” and greatness in his colors and clothes that I don’t see… and that my mother didn’t or couldn’t see in 1985. (But again, how do you sum up ones 44 years of single mother/daughter experience in one sentence post, if you know what I mean). 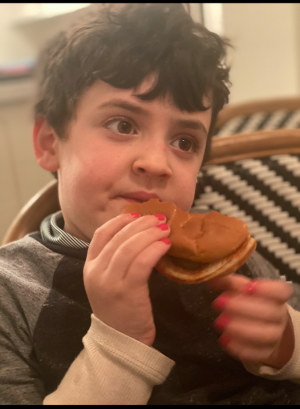 I’m not going to lie, as much as I had hoped that I had birthed at least one daughter, I often find myself relieved that I haven’t birthed at least one daughter… that the powers, the universe, and genetic makeup of my babies daddies gave me three sons. I often find myself feeling like I was meant for sons, that a daughter would be too complicated for me and that there is a bigger, more divine reason for my heart to beat blue…

Even when he wants pink.

That Mom… For the Win