That Mom… For the Win 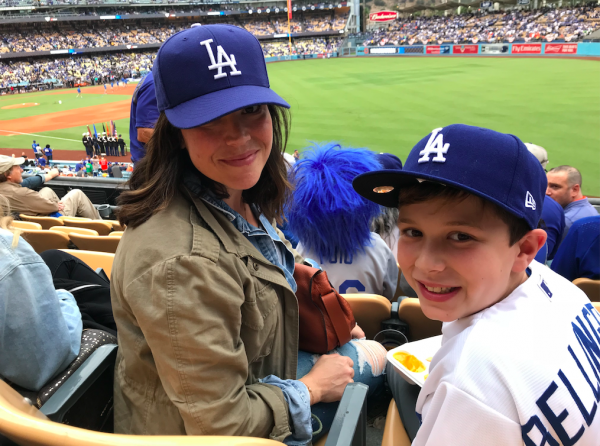 Maybe it’s his age, (I hope it’s his age), but according to Jonah, everything we do is soooo boring and not cool. He “barely gets to (insert ANYTHING a 10-year old would like to do),” and he never, I repeat NEVER gets to stay up late or have a sleepover in our bed. Also, I should mention EVERTHING I cook “is soooo gross and is always organic or made with stevia.” (Okay, I admit, that’s like half true. One point for Jonah).

At seems like lately, on a daily basis, I become THAT mom: “Do you realize how lucky you are? How privileged you are?” I list all the things that are wrong in the world and by the end of my list he feels terrible and then, without fail, later that night as I’m tucking him in bed, he asks me if I think he’s spoiled. I tell him, of course not, he’s just lucky and that LOOK, he has his OWN BATHROOM and all these amazing toys and books, and MOM! I KNOW. (I go too far). He proceeds to tell me he feels bad that he complains and he knows that we do so many nice things for him. I tell him I know he knows, and just wish we didn’t have to have that battle. He is sad and so am I. Am I too hard on him, I wonder. I mean, he is a product of a divorce. Maybe I should be nicer. My mom guilt soars and I hate myself for being THAT mom earlier in the day… but at the same time I’m relieved that he knows how shitty he sounds and wants to show appreciation. We kiss and hug and it’s lights out for 45 seconds, and I’m just about sit down for the first time in 8 hours, until he calls me back in just to make sure I’m still upstairs. Mean mommy rears her ugly head again: “YES, I’M IN MY ROOM! GO. TO. SLEEP!” The minute it comes out of my mouth I feel like a mean wench but I’m so tired, can’t he just go the F to sleep, but I hate myself for yelling… especially on a night he’s with me. Poor child of divorce. I. Am. The. Worst. I sit down on my bed, finally, and wonder if I should walk back in and give him a hug because I’m a dismissive biatch. But my phone buzzes with a text from a friend and for a second I forget what an asshole I am, (thanks to her double laugh with tears emojis), until the baby monitor lights up with crying and I cry, “MOTHERFUCKER,” and then yep, the mom guilt cycle starts ALL. OVER. AGAIN.

But back to child number one….

Jonah has decided that when he grows up, he wants to be (in this order), “A baseball player, a scientist that does stuff in a lab, a doctor, or a YouTube celebrity.” He’s made it clear though that being a baseball player is his number one goal and even though he only goes to practice once a week, he’d like to be the starting pitcher. (Can you blame him for having gigantic goals?) Anyway, his love for baseball has come full circle this year as we watched our beloved Dodgers make their way to the World Series.

Of course, like any 10-year old with a love for a sport and team that makes their way into the championships, Jonah asked if there was annnnnny way we could take him. At first the answer(s) was no, HAVE YOU SEEN THE PRICES OF TICKETS (which was said in the same tone of DO YOU REALIZE THERE ARE CHILDREN WITHOUT DINNER TONIGHT?)

But then Game 6 rolled around and Peter and I just got caught up with the idea of taking him and the magnitude of the surprise and the memories that would be made that HE WILL REMEMBER FOREVER. 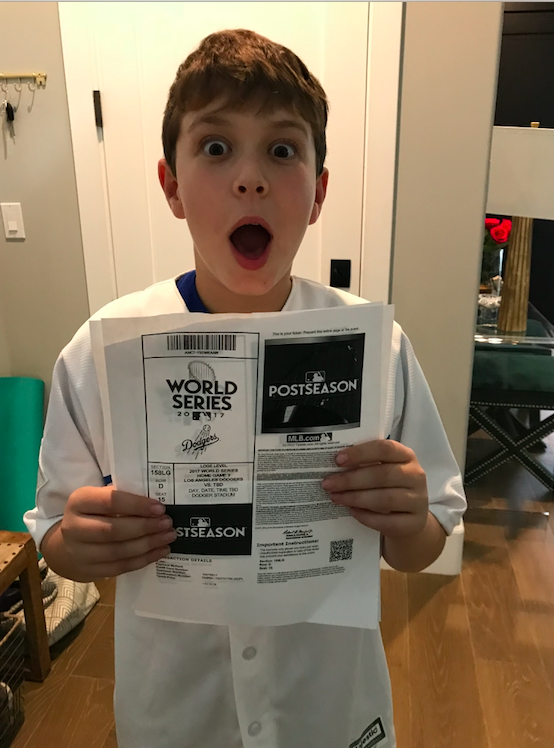 I’d like to walk you through each and every moment of that day, and that evening, because, my god, I don’t want to forget any second of it. (Don’t worry, I won’t. I’m just saying, I would like to)…

As we walked from our car to the big blue stadium, he held my hand and said “I don’t see any kids, here. Am I the only kid at the game?”

“Of course not. There will be other kids. Just maybe not as many as other games because it’s Halloween,” Peter said.

I stopped and looked at him. “Jonah, you are not spoiled. You are LUCKY. Do you hear me? This is LUCKY. This is not spoiled. This is AWESOME. And I want you to enjoy every single second.” 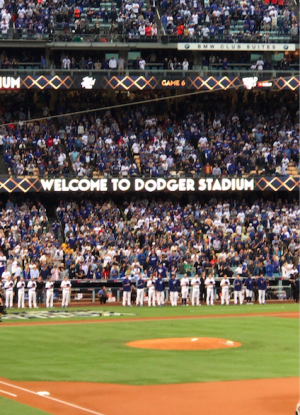 For the next 5 hours, he (WE) truly did enjoy every second – except when I swore to him that the food stand I took him to had French fries in a hat and it did not and he haaaaad to have the nachos. Wah. Luckily, I didn’t have to get too “mean mommy” on him and simply said, “Jonah, you’re at the World Series. There are worse tragedies in the world.” From then on out, it was pure fun. And pure, uninterrupted time with my boy. My sweet, sweet, Dodger loving, sassy mouthed, still mommy-cuddling boy.

Here are some highlights of what I will remember from that night:

-His smile when he opened the envelope and saw “World Series” tickets. He was speechless for the first time in 10 years (and this kid is a chatty little monkey).

-When Peter told him he had $100 to buy anything he wanted at the stadium so that he could remember this forever, he said it was too much. And he didn’t need that much. “Maybe I can find something for Oliver and Everett too.”

-Him holding my hand as we walked through the parking lot towards the stadium. “We’re staying for the WHOLE game, right? The WHOLE game?” Without a question, my son, the whole game.

-Walking him to the bathroom and waiting in line for him amidst a sea of grown men. My anxiety was soaring. “Don’t talk to anyone in there. And if a guy tries to high five you, just ignore him and leave.” “Mom,” he said, “If a Dodgers’ fan wants to high five me, I’m not leaving him hanging. We’re rooting for the same team.” “Okay, but wash your hands.”

-Singing the 7th inning stretch arm in arm. Perhaps one of the top moments of my life. 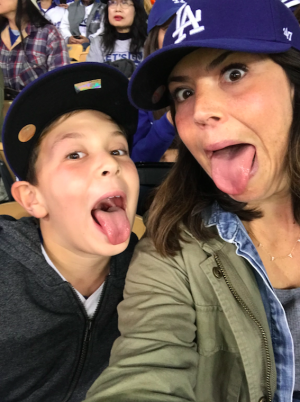 -Telling him that I had a good feeling about Joc Pederson right before he hit his home run. And then he did. And then we went crazy.

-His amazement when I said, “Look ‘Silver Fox’ is up.” “You know they call Utley ‘Silver Fox?!” (Yup. Thanks to you Vin Scully Jr. I learned it from you!).

-The last at bat – when Kenley Jansen shut it down. Jonah’s face was priceless. To jump and cheer next to him… It will go down as one of the most exhilarating moments of my life. One of those moments that you literally forget about everything else in the world—all the scariness, the stress, the ups and downs. In that moment, it was just FUN. HAPPINESS. JUMPS and HIGH FIVES. And a 10-year old who got to see his idols win a World Series Game! (Because boy, did they sure fuck it up in Game 7).

Somewhere during the 6th inning, after he told me various facts about each of the Dodgers and things I need to know about the game, he turned to me and said, “I’m glad I got to do this with you. Like, most kids probably don’t do these things with their moms. It’s kind of a dad thing. But it’s cool it’s with you.” I squeezed his hand. And then I envisioned that in 30 years, the next time the Dodgers go to the World Series (sorry Dodgers fans, it’s just that history usually repeats itself), Jonah will have children of his own and he will say to his kids, “Look at this picture of me and your Grammy,” (because that is what my name will be), “she took me to my first World Series game. Just me and her.”

“Wow! Just you and her? That’s cool,” my princess dress wearing,  (inevitably) curly-haired, sparkly-eyed grand-daughter says. (Because someone better have a girl after all this). 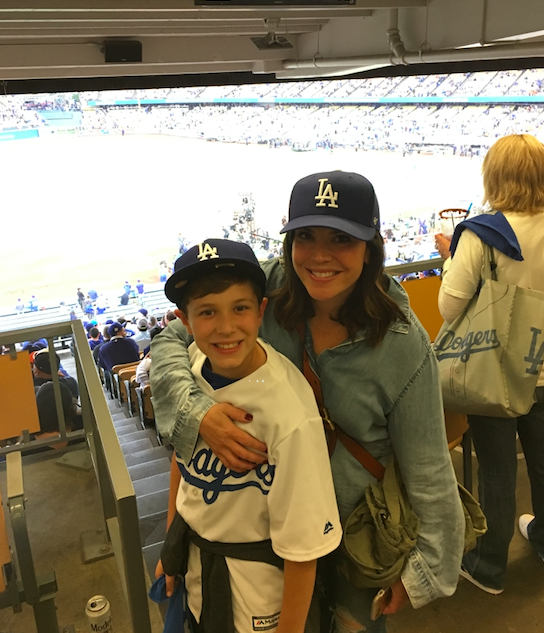 Got Milk? Building a Better Future for My Mad Scientist

Signs of a Good Date