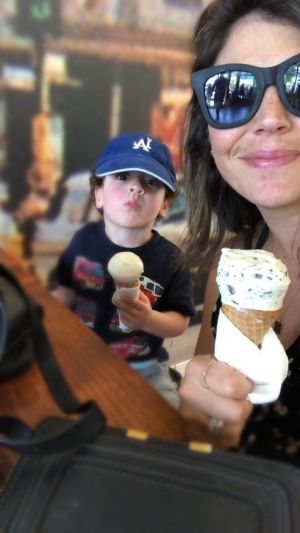 I used to think that the worst thing I could do for my kids was let them have too much screen time. But the other day, when Oliver let 5 helium balloons “fly to the moon” without any concern, I realized my Fort Nite, Ryan’s Toys, YouTube addicted little monkeys were the least of my worries: I am raising global warming terrorists and they give zero f**s about their carbon footprints (I’m saying those words as if I even know what that means).

This past week, I was convinced that a NBC Local news van was going to show up at my house to run a breaking news report about a series of (popped) helium balloons that landed in the LA River and clogged drains, contaminated the water supply, destroyed trees, killed animals, and shut down Postmates (the biggest natural disaster if you ask me). The balloons would all be linked to my house and children due to the DNA/ sticky lollilop/goldfish fingerprint findings that showed up on the broken latex pieces.  I wouldn’t be able to deny the crime. Because credit card receipts and my son’s piggy bank where mommy desperately grabbed all lingering change to purchase said balloons, would reveal that I did indeed spend $13.56 (in one day) on 6 goddamn balloons. Apparently helium is really expensive these days you guys.

You see, we live a few blocks from a balloon store, which is conveniently located 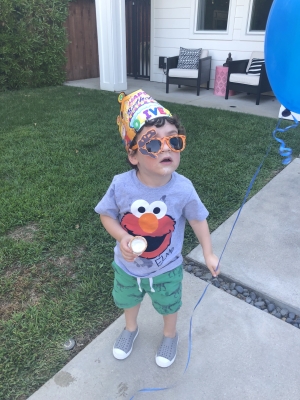 next to an (also overly expensive) ice cream shop. Oliver, because he’s not an idiot, has identified the stores’ proximity to our house and because I am not a clever, energetic mommy bunny, I can no longer come up with things to do in the afternoon other than walk to the ice cream store, let him eat ice cream that inevitably makes him not hungry for dinner,  walk down to the balloon store, and spend way too much money on balloons that end up in the sky. To make (global warming) matters worse, I had a $23 credit at said balloon store because I, like the forgetful mommy I play in my blog, actually didforget to pick up the $40 worth of balloons I ordered for Oliver’s party. I knew something was missing.  Anyway, because we’re at the store 675 days out of the year, the owner was kind enough to extend a credit to me.

Needless to say, when Oliver’s greatest joy in life is now buying balloons and releasing them to the universe immediately, we flew through that credit real fast.

At first, I was hesitant to let him let the balloons “go to the moon” the minute we got home. I was worried that the second they flew up, he would want them back and freak out. Which he did. But he freaked out MORE when I said we couldn’tlet them go. So I figured, fine fucker, let’s learn a lesson. I suppose he quickly learned the lesson that they weren’t coming back but instead of bursting into tears he ERUPTED IN LAUGHTER. He thought it was HILARIOUS.  The higher they went the more exciting. One, two, three, four, five balloons… within a matter of seconds GONE. “Bye byeeeeee balloons!” he laughed. “Bye byeeeee! See you later!” And his best friend/arch nemesis Everett soon found it hilarious too. 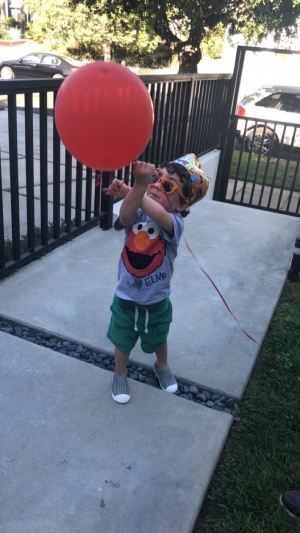 And then I remembered some video I saw on instagram of a whale (or was it a seal) being pulled ashore with balloons tied around its neck (thanks to reckless, terrible moms like me) and I felt awful. I am literally ruining the world one expensive balloon at the time.

BUT can we plus side this for a sec, people???  I’m shopping small. I’m shopping local. I’m supporting a local balloon farmer!

No seriously, isn’t that something?

Okay, fine. The squirrel in North Hollywood that probably just ate a yellow balloon for breakfast is not something to be proud about, BUT keeping a local shop in business and my 3 year old who is like a volcano waiting to erupt between the hours of EVERY SECOND AND EVERY SECOND happy is something to feel okay about.

Right now, my journey to self-love and care is all about taking wins where I can get it—even if it means contributing to the destruction of mother nature. Okay fine.That’s dramatic. I know my lazy mommy’ing isn’t going to turn our country into Gilead with polluted Colonies a la “Handmaids Tale”, but I also recognize it isn’t helping. I know that you, (the earth loving goddesses that I imagine have a foul-smellingcompost that you use to fertilize your Kombucha or Collagen Peptide plant), ARE actively doing things to SAVE our planet and don’t do simple things like flush after every pee. And neither do I! (Though that’s mostly because I forget to and happen to hate the sound of a flush. That for another post though). HOWEVER, explaining to Oliver that “if it’s yellow, we keep it mellow” is too much for him to process amidst potty training. I let him flush the potty after he pees, because A) He already pees standing and like the good man I am raising him to be, likes to wipe down the rim after he’s gone and b) I believe he deserves the satisfaction of seeing the pee go away. It’s as exciting as the balloon “going to the moon” right now. In fact, sometimes I let him do an A for Effort Flush (even if he just stands at the potty but realizes he “doesn’t have the feeling yet” because FLUSHING is PART of his Potty-training/ just give me the Skittles process so I LET HIM FLUSH THE FUCKING POTTY OKAY. And now that I’m confessing my sins, I might as well tell you about how I let Oliver let the water run while he brushes his teeth. Three times. Every night. I’m sorry, but he is just so damn excited about brushing his teeth lately and is fully willing to let me get all up in there- front, back, side etc- but on one condition: The sink has to be running. The good news is I really didn’t start enforcing teeth brushing until like, last week. So if you’re doing the math, that’s actually 3 years of water I CONSERVED. So there.

Look, I’m in survival mode right now. I know at a certain point I will have to make the switch and stop using the excuse that I “just had a baby” or that I haven’t “just moved” or haven’t “just not had time to go to the market.” But right now, I’m just getting by. And it ain’t graceful. I’m certainly not at my worst but I’m not at my best. I don’t know how else to explain it but these days, I feel like I’m in a gluten free hamster wheel with really good jewelry on.

Although, I’m looking around the room right now (at the laundry that apparently has an issue living in a hamper) and I’m suddenly feeling like less of a failure…  These days Oliver is wearing Jonah’s hand-me downs,  Everett is wearing Oliver’s hand-me-downs and I’m still wearing underwear from Obama’s first term. And that folks, is what we call conservation at it’s finest.

PARENTING: I COULD LEARN A THING OR TWO…