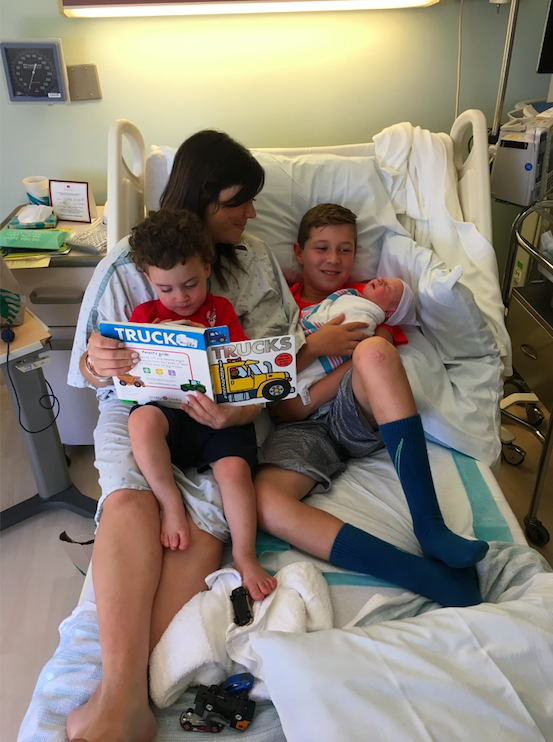 What do two babies under 2, a new house, a 4mm kidney stone, and a beautiful French Au Pair all have in common? C’est Moi, mes amis! C’est Moi!

For someone that prides herself on feeling productive, this has not been a very productive year on the writing and creativity front. But if you count productivity in terms of how many diapers you can go through in one day and how many children in your house refuse to sleep like normal human beings, then I win the productivity of the year award hands down.

But back to the kidney stone part.

On August 8, at 10:31pm, Peter (my husband- just in case you forgot his name) and I welcomed Everett Jack to the fucked up world. As you may recall, Oliver was delivered via c-section due to his breech position (which was due to the mass). So when Everett was born, it was really important for me that I try to deliver him naturally. I was thrilled that my doctor supported the idea of a VBac (Vaginal Birth After Cesarean) and even happier that my uterus showed signs of supporting said VBac … But when my due date of August 4th came and went, I started to get nervous that I’d be heading back to the operating room, thereby further exacerbating my FUPA. (That for another post. Lucky you).

But when I reaaaally started to get nervous was on Saturday, August 5th… Peter and I took the kids to go visit my parents and have lunch. We headed to a local deli and Peter decided to order Matzoh Brie (Click here for details on this jewish delicacy).

“Yeah, why?” Peter said, handing his menu to the waiter.

“Matzoh is eaten in like, what, March or April? During Passover…?”

“What are you talking about?”

“You’re out of season. No one eats Matzoh in the Summer. That’s weird.”

“Watch it,” Peter and I say simultaneously.

Well, wouldn’t you know, 2 hours later, Peter was having trouble from down under. As we’re about to leave my folks’ house (which is approx. 20 min from our house), Peter said he wasn’t feeling well. He had a terrible stomach ache and felt completely nauseated.

But fifteen minutes later, while on our way home, Peter’s unleavened bread poisoning seemed to be taking a turn for the worse. At this point, he was white as a ghost, sweaty and in tears. No, literally, tears. It was so bad he was kicking the door and Jonah was screaming to call 911. Good thing traffic on the 101 was speedy that day. And by speedy I mean, Los Angeles.

Well… 5 miserable hours later, we walked out of the Emergency Room: I still with a baby with my stomach and Peter with a 4 mm kidney stone that also was to pass.

*Note* Did I mention the part where the ER was so overcrowded that they didn’t have a room for us so we were stuck in a hallway next to what I’m fairly certain were rotting corpses (everything smells like death when you’re pregnant) and I had to hold the urine cup/bed pan for Peter out in the open (No literally- his junk was out in the open because apparently when you’re in that much pain, you don’t give a flying fuck if the homeless man next to you is talking about deadly birds while staring at your manhood).

ANYWAY, if you’ve had or heard of a kidney stone, then you know how incredibly painful it is. But if you’ve had a baby or heard of what it’s like to be overdue then you can find it in your heart to have sympathy for both of us. Mostly me though. Because men are babies and I. STILL. HAD. TO. PUSH. A. BABY. OUT. OF. MY—

Tuesday, August 8th, 3:30am… I wake up with contractions… They continued for the next few hours and since I was planning for a VBac, laboring at home too long wasn’t an option. In case you already forgot, PETER STILL HAS NOT PASSED THE KIDNEY STONE AT THIS POINT. AND HE’S FUCKING MISERABLE. AND I’M FUCKING MISERABLE. 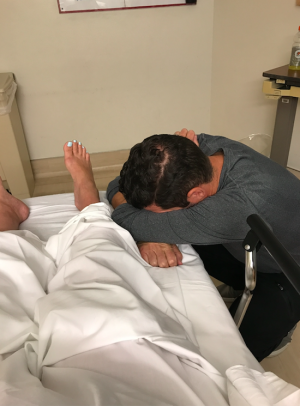 7:30am… We get to labor and delivery and I’m taken in to a room in triage. As I’m getting undressed and hooked up to the monitors to assess the contractions and my stage of labor (which is like 0.0 at this point), my husband also begins to take off his clothes and LAY ON THE FLOOR. OF THE HOSPITAL.

“Peter, what are you doing?”

“You’re on the FLOOR. Of a HOSPITAL.”

He grabs a spare blanket off MY bed and lays it on the floor. If I hadn’t only had water in the last 12 hours, I would have definitely thrown up right then and there.

“Honestly, Jen. I don’t know what to do… The pain keeps getting worse and worse…”

Video of Peter on Hospital Floor

Let me be clear: If you think I was an asshole for being an asshole to my kidney stoning husband, well then I beg YOU to contract every 2 minutes without an epidural while your husband sits conveniently tucked away on the toilet in YOUR delivery room moaning while drowning his sorrows in twitter (please, no poop takes that long. We’re on to you, men) in hopes a stone passes through his hoo ha. 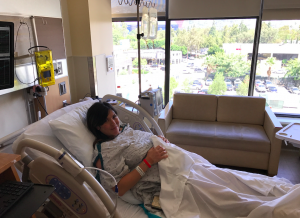 At approximately, 3:30 or 4pm in the afternoon, after having a foley balloon inserted in my hoo ha (you can google foley balloon on your own, friends) and shooting from 1cm to 4 cm in a half hour, Peter emerged from the bathroom looking victorious.

“I think I just passed the stone.”

“Because there’s a rock in the toilet. And I feel better.”

“That’s— FUCK. Having a contraction.”

Across the room, I see him rummaging through what appears to be a completely STERILE cart made up of stuff that at some point will not only be touching areas on my body that I don’t want staph infected, but that also could be touching my perfectly new newborn! (If you’re sensing a germaphobe sitch here, you’re a really good comprehensive reader).

Just as Peter pulls out what looks likes an IV bag and a latex glove, the nurse enters. He excitedly tells her he passed his stone and wants to get it from the toilet. She is more amused than I’m hoping given I AM THE ONE IN GODDAMN LABOR, but I guess it’s exciting for everyone to see what a black stone that really is about 4mm looks after it’s traveled from your kidneys.

She gives him a urine sample cup to store his “treasure” in. I ask him to wash his hands for the 976th time, congratulate him for a job well done, and then tell him to:

Okay, I didn’t say thaaat. But I did tell him to take the turkey sandwich he could finally stomach to eat OUT OF THE FUCKING ROOM NOW before I died from the smell of hospital deli meat and sour coleslaw.

I know what you’re thinking: I’ve got this team player thing down. I do marriage well.

After a few more hours of more ice chips than Cedars Sinai was prepared to make, and about 15 minutes of pushing, our beautifully round and blonde-haired baby entered the world. 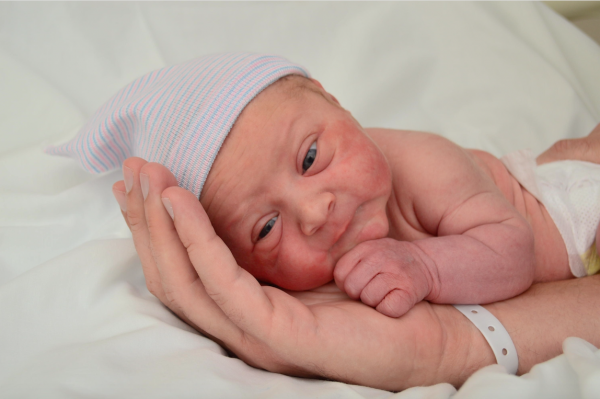 After such a traumatic experience when Oliver was born, being able to deliver Everett vaginally was truly cathartic and healing for me. I knew that not only I would feel better physically compared to a c-section, but that emotionally, I would be able to walk away from the birth knowing that Peter and I had at least one chance to have that “it’s a boy!” moment and hug and kiss and cry without feeling terrified and confused. It was as perfect of a birth as I could have asked for. Minus maybe the kidney stone part. 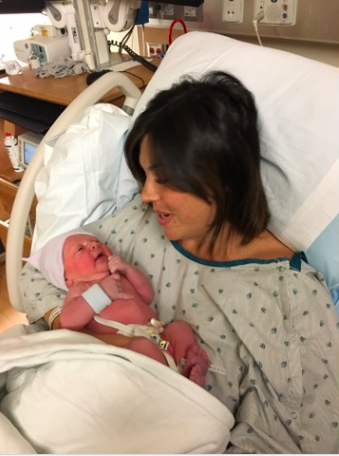 “In your coming year, dear Virgo, you will put your talent for communications to good use.  Jupiter, there giver of gifts and luck, is now touring your third house of speaking and writing.  How well you make your ideas heard and how passionate you are about them will strongly color the coming year. (This is the good part): You will have a period of 13 months, from early October 2017 until early November 2018, to make your mark.  Saturn has been in your fourth house of home and family since December 2014 but will depart in December 2017….”

I love everything about this horoscope.  I have been in house and home since December 2014 (More on pregnancy and loss here). And while my priority will always be my family, I am ready to feel productive again… to make my mark…

I look forward to sharing my stories here again more frequently. And while things like husbands passing kidney stones during labor certainly make for a great story, I’m hoping that I can summon the old productive me… Share more mundane and mellow things like my favorite weekday salads, the new skin regimen I’m doing, and the time I broke my foot during my most recent labor. As in the one 9 weeks ago…

Yup. How’s that for productivity?

Helping Other Parents in Need: We Are Lucky

The 5 Emotions of Sleep Training: A Love Story