Holiday Cards: What I Really Wanted to Say 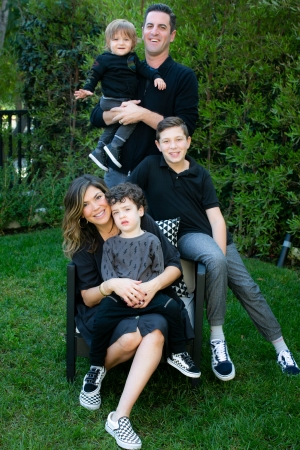 As a little girl, my dream in life was to get married and have a big family. Mission accomplished (twice, lol!) So when the holidays roll around, I’m not going to lie and pretend I dread the holiday card frenzy. I don’t! I love it. I love having a reason to hire a photographer and get pictures of us all together. I even like the process of stamping and labeling envelopes. I know, weird. But the thing is, we all know that behind these photos, children were screaming, the house is a mess, mommy is counting down the seconds until the kids go to sleep, and daddy is checking the scores on his phone, yet again. And that’s just the tame version.

In honor of the holiday season and all things year end, I thought I’d share what our year-end holiday letter might look like if I were being totally candid and unfiltered, along with some of the pictures that ended up on the cutting room floor. In true transparent form, may I recommend reading with a glass of eggnog spiked with something stiff (fuck that morning smoothie) and last night’s leftover Chinese food?

Oh what a year it’s been!

2018 started off with a big shift in our family when we decided on New Years’ day, in fact, that we needed to get rid of our annoying dog Apple. Not only did Jenny develop horrible allergies that led to her coughing up green phlegm like the homeless man living on the embankment up the block from their home, but Apple really wasn’t as cuddly or cute as the shady dude at the adoption fair trying to pawn her off claimed she’d be. Shih-tzu Terrier Mix our ass! Oh well! After a good cry and telling us we were the worst parents in the world and he wished he could find a new home too, we promised him more iPad timeand Jonah understood our wish to find her a new home with people that knew how to walk/feed a 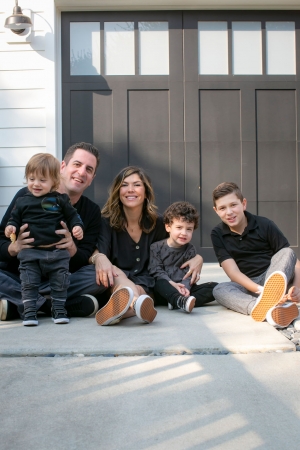 puppy, and within a week Oliver, Apple’s only true friend in the house, forgot we even had a dog entirely. As luck would have it, a lovely woman up the block who silently judged me as I tugged Apple on our daily walks while I checked Instagram, noticed how miserable Apple was with us, and offered to find her a foster parent. Lo and Behold, the foster parent fell in love with that ugly little punim and kept her for herself! Apparently, she doesn’t mind white hair all over her furniture or a dog that looks like it escaped the Warsaw Ghetto. Anyway, the word on the street now is that her new owner changed Apple’s name to Olivia and moved them to New York!

Speaking of things that make me think of pizza, once again Jenny committed to losing that pesky baby weight! Being the dedicated and committed person she is, Jenny is now an expert in all things keto, paleo, no sugar, I give up, low carb, low dairy, fuck this shit, smoothies only, high fat, low fat, I still have fat diets. She still has a little weight to lose but enjoys wine and wine and chocolate nightly so will continue to blame her lack of will power and control on her kids, exhaustion, Direct TV, and Trump in 2019.

Peter has had quite a crazy year too! This mother fucker ended up with another kidney stone. This time, it was so big it got obstructed and caused an infection in his kidney- He ended up having to have surgery! Jennifer was a perfect wife and stayed by his side while he was in the hospital and only told him that she

would actually murder him once if he didn’t see a Urologist and change his diet after the procedure. She actually told him she’d murder him twice, but the second time was because she asked him to get up with the baby in the middle of the night but he can’t hear anything out of his left ear so he actually didn’t hear her say this… or the screaming baby. Though he’s got the insides of a 78-year old man, Peter still manages to get out on the golf course and shoot 76. Or 65. Or 100? Jenny doesn’t actually know what he hits because after he’s gone on a Saturday for 6-7 hours when it takes 4.5hours to golf, she loses interest and turns to sales on ShopBop.com to cope with her anger. Speaking of Daddy driving Mommy to shop, Peter that lucky fuck, managed to go Scotland and Ireland in August for 10 days! He missed the baby’s first birthday but thanks to technology, Jenny was able to text him lots of pictures on the big day along with a lot of sad Emojis to let him know how guilty he should feel! His trip was really marvelous and we’re so glad he got to take T E N days for himself. No one deserves it more than him.

Moving on to le bebe. Ahhh, the baby! Everett, aka, the Forgotten Child. What a dumpling of love and poo pebbles that are impossible to wipe off his testicles. (The experts say it’s important to use proper terminology around the kids). Everett is 16 months old and really is adorable! Despite the daily blows to the head he takes from Oliver, he’s turning out to be quite the talker! The fact that he knows Elmo lives in mommy’s phone and all he has to do is scream loudly and say “Emmmo!” and she will give it to him along with a lollipop at 7am is pure brilliance. And I thought the other two were smart! Ha! 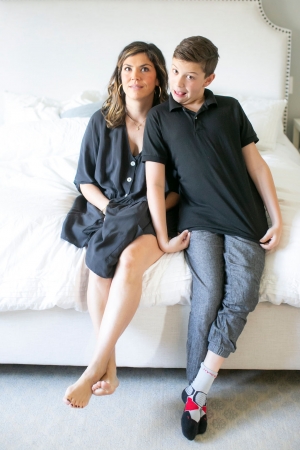 Well, Everett isn’t the only one with a knack for technology. Jonah is a Fort Nite and Call of Duty master. Nothing is more enjoyable at the end of a long day where no one knows how to shut the fuck up and leave me alone than listening to Jonah say “bro, bruh, bro, your trash, bro. Skrr. Skrr. Bro. Kill him. Bruh.”  I just love the friendships he’s making with random old men on the internet. We’re also so impressed by the way he’s been able rack up $98,712 in PlayStation and iTunes charges this year simply by wearing us down, throwing a temper tantrum and telling us we suck and how unwenfair life is.  Despite our best efforts to remind him that gratitude goes a long way and to think about the all the other children less fortunate that he is (ie. kids separated at border from their parents, kids without a home this Christmas, kids that DIE), he manages to get us to say fuck it this is the last time each and every time!! He has the real making of a boardroom executive or US President! We are beaming.

Last but certainly not least, our middle child and currently the one who we believe is responsible for our marriage counseling: Oliver! Oh this little whipper snapper stops people on the street with his big eyes, curly hair, and odd screams when they pass by. Oliver’s favorite words right now are Fuck, Jesus Christ, and Blippi. This year he made major strides when he started going pee-pee on the potty! We were so proud. Unfortunately, pooping on the potty is still a work in progress. Thanks to many trips to the gastroenterologist, we’ve determined there’s no medical problem, he’s just a willful motherfucker that 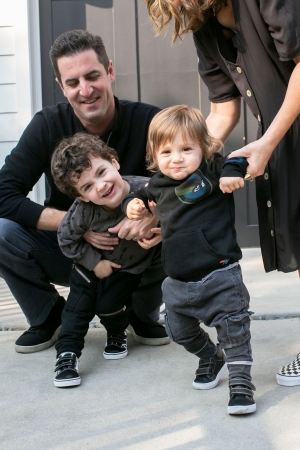 refuses to go. SO, we give him a nightly dose of Milk of Magnesia to blast that shit, literally. One day, he blasted so hard at our favorite sushi restaurant, the bathroom looked like a Jackson Pollack painting. What fun memories we’re making! When he’s not screaming with constipation pains, Oliver’s favorite activity is playing pretend restaurant and kitchen. He loves to take “orders” and follow it with “Coming riiiiight up!” His imagination is actually quite remarkable and we owe it all to a YouTube channel run by a very lovely and unintelligible Vietnamese family that makes videos on various pretend play like driving through McDonald’s and getting arrested for stealing cookies. He loooves this channel and its’ main character Uncle Jon.  Needless to say, Oliver has already discovered the world of the Happy Meal and goes to speech therapy now weekly.

We are so grateful for all the love and support you all have given us this year! We hope to see you in 2019! Just text Jenny or Peter, but mostly Peter because Jenny “forgets to hit send” on her texts back to people a lot these days. Ooops! Life is so crazy isn’t it!

Here’s to crazy and lots of holiday cheer.

Jenny, Peter, Jonah, Oliver, Everett and the ghost of doggies past 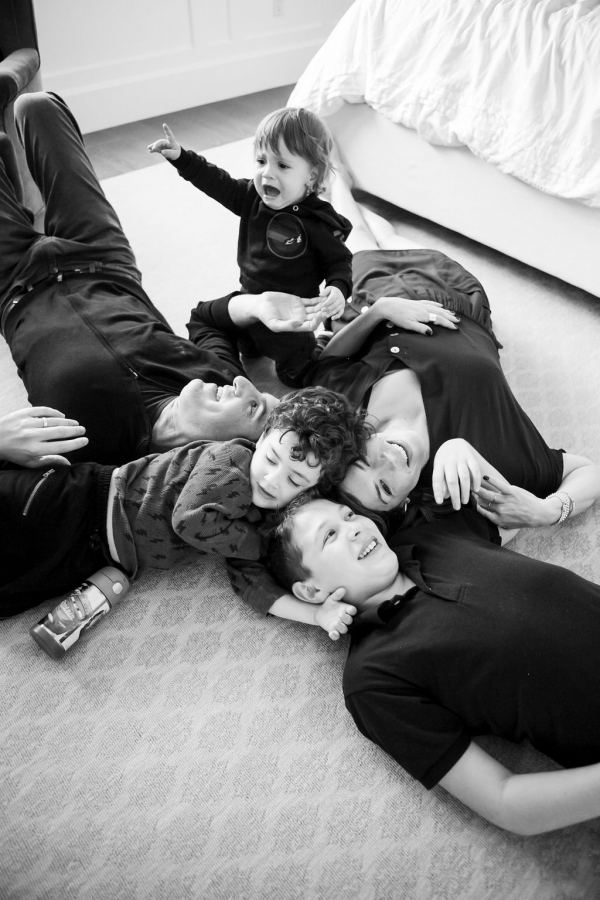