Go Forth and Forty

Go Forth and Forty

I’ve typed and retyped an opening sentence 58 times. I was going to start by saying something simple and straight to the point like: “My 40th birthday is in 10 days” But that is so… it’s just… so… And not what I’m really trying to say. The problem is, I’m not sure what I’m trying to say about my birthday… That I’m sort of freaking out? That I’m sort of thrilled and excited? That I now understand the  “magic” of my rear view mirror and all that it reveals?

A lot of my older girlfriends tell me that 40 is fabulous. That at 40, you are finally confident– you know who you are, you know what you like, and you aren’t afraid to get and say what you need…

Ladies– Just out of curiosity, does this “this is my fight song, take back my life song” thing kick in immediately, or should I give it a few months before I stand in front of the mirror with my stomach in it’s natural (not sucked in) state and then let out a big Oprah /Brene Brown “I-am-Enough -YASSSS-Queen!” exhale?

I don’t know if it’s because of my upcoming birthday, or the weight of events that have taken place over this past year, but it’s like I’ve had this running bucket list in my head of things I was supposed to accomplish… I think about it constantly. Let me be clear and completely honest though: I realize this “bucket list” is trivial in comparison to already finding and marrying my best friend, giving birth to two deliciously joyful children, and owning a house that keeps us warm at night. I have done and have the most important things… But I want more. There’s still more to do. More places to go. More things to be.

A few months ago, I started to rattle off a list of all the things we needed and HAD to have done to the house. These rants tend to stress Peter out (to put it mildly).

“Don’t we have everything we need?” he asked sweetly (despite the darts I threw back with my eyeballs).

“Yes, but our dresser sucks. It sounds like a train is coming into the station every time we open the drawer. And I’ve had these night stands since 1945.”

The next part the conversation started to get ugly, because it went from all the furniture we needed to replace to all the dresses and shoes I needed for the Fall (and Winter, and life) and why if “I just bought a few ‘designer pieces,’ I could stop shopping and buying so much crap at Target,” (which let’s face it, I will never, ever stop doing).

Eventually Peter talked me off the ledge of I-need-want-must-have-mania, as he often does, but one thing I did say, that I wanted him understand, is that just because our Ikea dresser IS fine and IS functional and even LOOKS GOOD, DOESN’T mean that I can’t WANT to someday, SOMEDAY NOT own a Hemnes Kukenvaken meatball dresser.  I would like, as I set forth into the second half of my life, to have at least one chapter of “Home” that does not include assembling furniture based off of truly horrible and nondescript photos, and then spend a month pretending like I’m the queen of Pinterest, hacking the shit out of a $95 dresser to make it look like a $565 dresser, when in fact I end up SPENDING $565 friggin dollars on paint and fancy knobs (because it’s all about the detail, baby).

DO YOU CATCH MY DRIFT?

At 40, I want to step it up a bit. DIYing, yes I love it and even happen to be great at it. But you know what else I love and am great at: Paying people to do shit.

Okay, I’m getting on the wrong track here and am starting to come off as entitled and angry. Please know it’s 7:30pm and I haven’t eaten it’s all food mood talking right now.

ANYWAY, I think what I’m trying to say is that I have so much left to do… and though it may not make perfect sense, having a home that isn’t entirely furnished by something that nearly caused a divorce trying to put together with a Swedish bobby pin, is just one of the many things I want to experience.

Call me crazy, call me snobby, call me HUNGRY, but folks: This is on my bucket list. Along with winning an Oscar. Visiting Thailand. Learning to play chess.

I want to learn how to ski. And snowboard. I’ve literally never done either.

I want to see Dudamel at the Walt Disney Concert Hall.

I want to go to New Orleans for Jazz Fest. Or just for a long weekend and get drunk on jazz and beignets.

I want to spend a month on Lake Como in a villa with my family and learn to cook. But mostly just eat.

I want to complete all the screenplays I’ve started. And sell them. And have them made. By Judd Apatow.

I want to attend New York Fashion Week (after experiencing Paris and Milan’s), and sit in the front row and “get it.”

I’d like to take my kids to Yosemite, the Grand Canyon, Mount Rushmore… And I’d like to get there in an RV…

I want to tailgate and then attend my first NFL game. In a city that cares about football and actually gets cold in the Fall. I also truly want to understand what I’m watching.

I’d like to take a goddamn Soul Cycle class to see what all the hype is about.

I’d like to raise a million dollars for the Vascular Anomalies Clinic at CHLA so they can continue helping children like my sweet Oliver.

I’d like to have all the photos I’ve taken digitally printed, organized, and put in beautiful little albums. So I never forget anything. Especially the part when I turned 40 and my life changed forever. 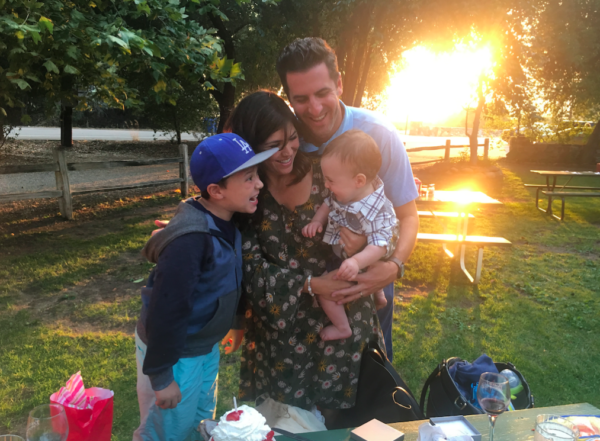 Honeymoon Part 1: Our Stay at Palazzo Avino in Ravello, Italy