1
“I’d like the pie heated and I don’t want the ice cream on top, I want it on the side, and I’d like strawberry instead of vanilla if you have it, if not then no ice cream just whipped cream but only if it’s real; if it’s out of the can then nothing.” —
Sally Albright, When Harry Met Sally 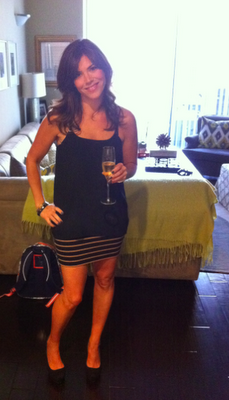 It’s official. I am who I am. According to all things science, my brain (the prefrontal cortex, to be exact) was completely formed and developed at the age of 25… This is the part of the brain responsible for decision making, inhibiting impulses and helping to execute plans and organize behavior. Though, as a Virgo, it’s safe to say my thought process has had a lifetime of being overly organized and I’ve never entirely allowed extreme impulses to run free (eating leftover chocolate cake, SATC Miranda-style, not withstanding). The point is, as my 36th birthday approaches next week, it’s now totally safe to say, my shit is sealed. I am fully baked.

When I first saw “When Harry Met Sally” in 1989, as a 13 year old, I knew I loved the writing and I knew that someday I would HAVE to live in New York… But I didn’t know that Meg Ryan’s character Sally Albright and I would have that much in common…. She seemed anal. Uptight. Particular. According to Harry, she was the worst kind of high maintenance because she thinks she’s low maintenance:
Sally: I don’t see that.
Harry: You don’t see that? Waiter, I’ll begin with a house salad, but I don’t want the regular dressing. I’ll have the balsamic vinegar and oil, but on the side. And then the salmon with the mustard sauce, but I want the mustard sauce on the side. “On the side” is a very big thing for you.
Sally: Well, I just want it the way I want it.
Harry: I know; high maintenance.
Look, I don’t think *I* am necessarily “high maintenance,” (close friends and family, you may insert your laugh/eye roll here), buuuut like Sally, I do like things the way I like them. Much too my detriment (and probably those who I’m closely connected to too), I’m a perfectionist. Can it be exhausting? Yeah... Can it be aggravating? I guess... Can it ruin a perfectly good moment because I get lost in the minutia of a detail, a point, a word? Um, okay. Suuuure… BUT, I guess it’s part of the package. I am who I am. Like Sally, it may take me an hour to order a sandwich, but the good news is, all that time spent getting it right will result in one happy customer. And let me tell you, a happy Jenny is a happy world.
So there’s that.
The point is, while the die has been cast on the genetic, and certainly, zodiac chart fronts, I realize there is always room for improvement. In fact, this year, I’m going to focus my energy on learning to trust in the unknowns…. From how a disagreement might get resolved to how my steak will come out at a restaurant (without me practically drawing the server a diagram). I’m going to try to not over-analyze and think through every situation and let things just be…. Well, I mean, most of the time. Let’s not get completely crazy here. Someone has to keep things in order.