Since the inception of this blog, I have affectionately referred to my son as “Baby-Ko.” But alas, the time has come to not only acknowledge the fact that though he is forever my baby, he is in no way a baby. He is a little boy…. A little boy with an infectious smile, incurable curiosity, and an ability to produce bowel moments on a moments notice.

Yup. I simply told him that I had a Buzz Lightyear motorized motorcycle that would be his in exchange of 3 poops on the potty, and I saw in his eyes a “Noooow we’re talking, lady,” smirk that he never gave with my lousy M&Ms and Skittles offerings. The drawn out, exhausting, and tactical negotiations that I had been dealing with for a month suddenly ceased. He threw me one last, “Holy shit, this bitch means business,” look and it was game on.
Of course, I had no idea that only 2 hours later, he would have met his goal (and then some), but a deal is a deal. 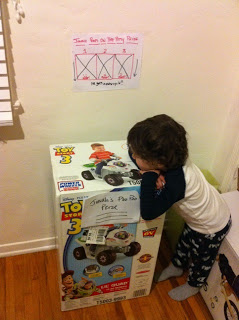