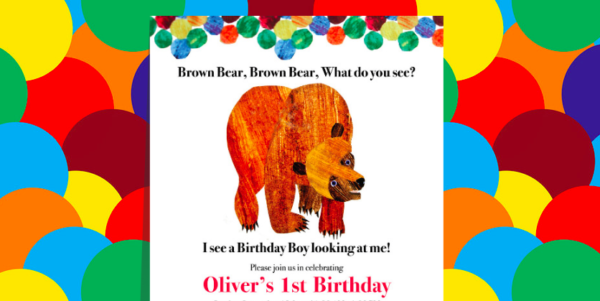 What Oliver wants, Oliver gets. Since day UNO.

When he started to crawl… You want to push mommy’s new sunglasses around on the floor? Have at it. (They’re knock-offs anyway. Because, you.)

When he started eating… You want to eat your weight in puffs and cheerios? Fine. Just, fine. (At least they are loaded with spinach and kale anti-oxidant chia flax omega 3 DHA super green beet juice. Who needs to cook anymore).

My point is, this kid is indulged. And so was/is Jonah. Let’s not pretend that his Royal Highness doesn’t get  extra special treatment either. Well, when it came time for Oliver’s 1st birthday, I sat down with him and asked what kind of birthday he wanted. In very clear words, (God those brain puffs are amazing) he told me he wanted a Brown Bear, Brown Bear themed party… With a bounce house for the big kids and some bubbles for his young peeps. Hey, he knows what he likes.

Okay, fine. He didn’t say it that clearly. He just threw me the Brown Bear book as he does every day and said “Bra Beh” and I knew/know what it means: “Read me the ‘Brown Bear’ book now, mother fucker. And hit repeat until I say stop.”

So after the year we’ve had, we felt (okay, I felt… because I like to create work for myself apparently), that a big blowout bday party was necessary to celebrate the big ONE. And, because he is OBSESSED with Bill Martin & Eric Carle’s Brown Bear, Brown Bear (and Oriental Trading and Etsy are my best friends), I figured this would be a perfect theme. Btw, he’s also obsessed with dogs and for a second I wanted to have a puppy party where we’d bring puppies here and let the kids pet them. But then I thought about emergency rooms and fleas and I thought red birds and green frogs were a safer bet.

Unfortunately, I didn’t take the greatest photos to share my Pinterest prowess, but I got enough to give you the jist of it AND am happily sharing the links to all the things I purchased!  Because that’s what friends with brilliant children are for.

We had a table full of snacks… Goldfish crackers in a goldfish bowl (with a net for scooping), Grapes for Green Frogs, Brown bear (Teddy Grahams) bites… For lunch had a hot dog and hamburger cart! That was definitely a hit. I used super cute napkin rings (which I downloaded from Etsy) with yellow napkins and blue utensils. 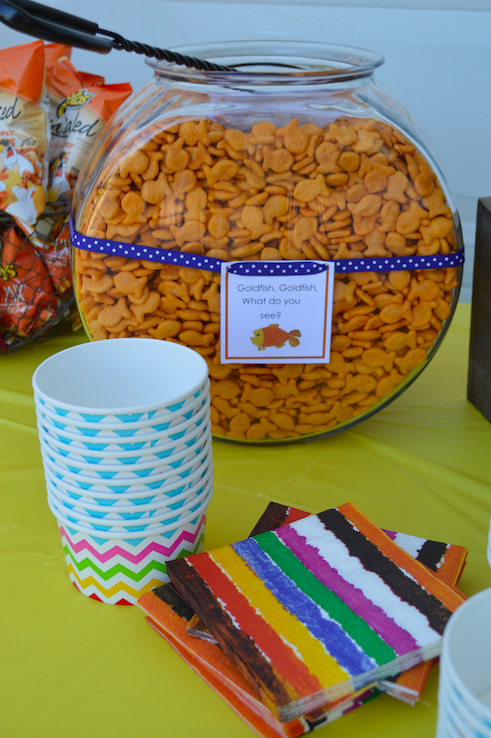 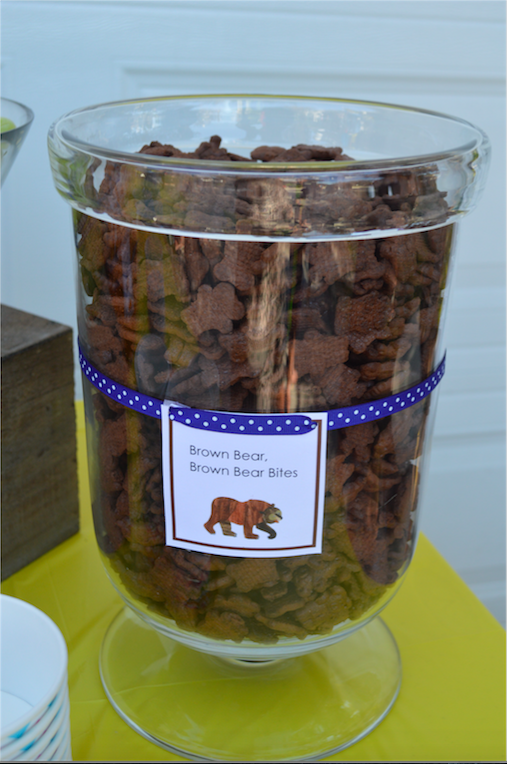 Sorry… this is the best shot I got of the napkin roll ups. Hey, this blog is Perfectly Disheveled for a reason. Case in point. 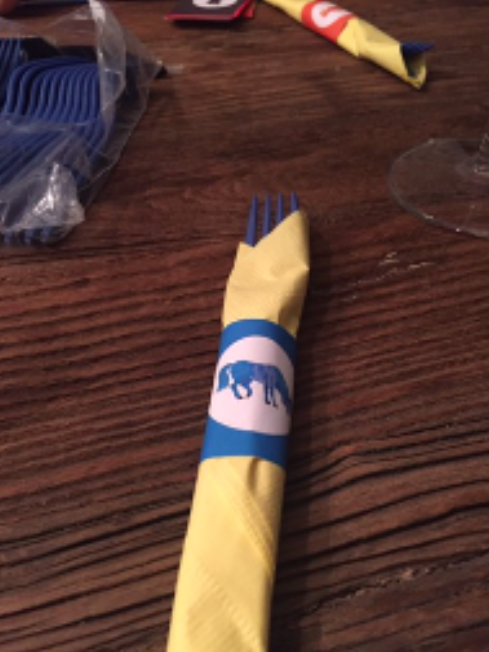 For party favors, I cut out the printable tags and tied them on to giant bubble wands. 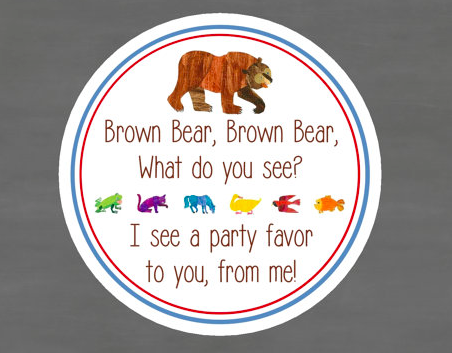 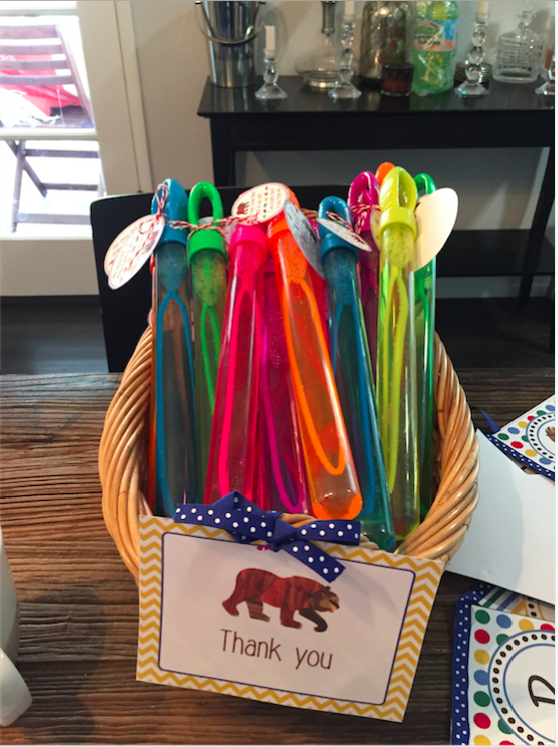 I used old ribbon that I had from our wedding to make the Happy Birthday banner which I hung on our front porch along with the cutout of the animals. 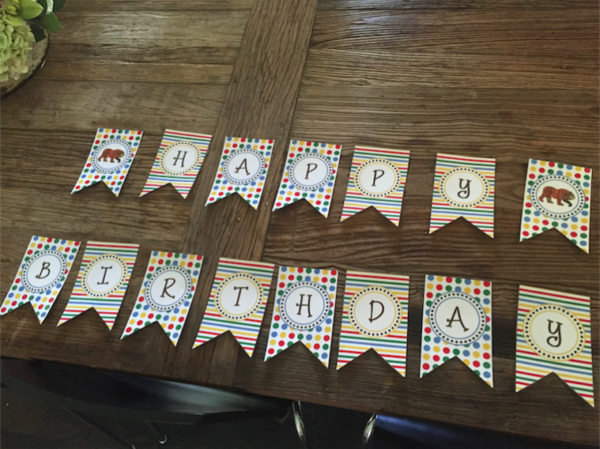 I also used the ribbon to make a small banner out of what were supposed to be cupcake toppers. 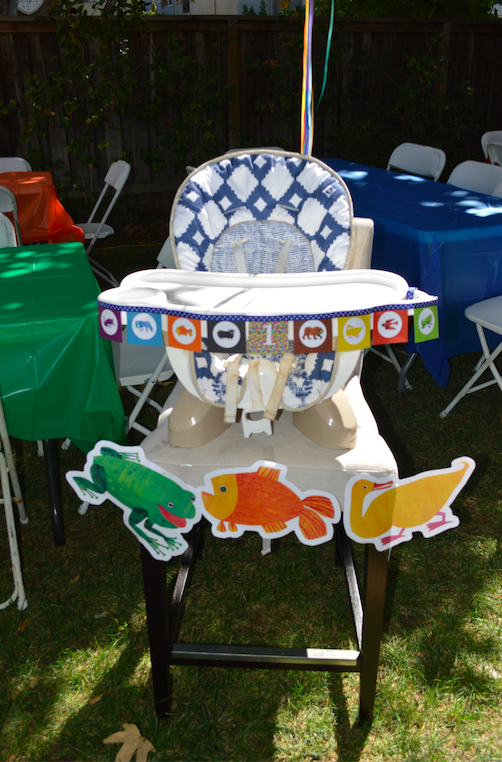 We hung lanterns from the trees which looked pretty cute and tables were covered with table clothes and balloons in coordinating primary colors. 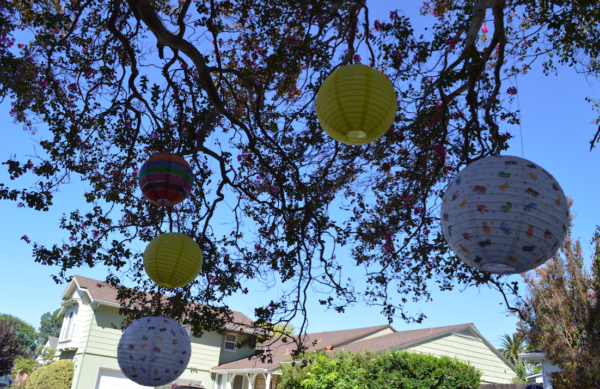 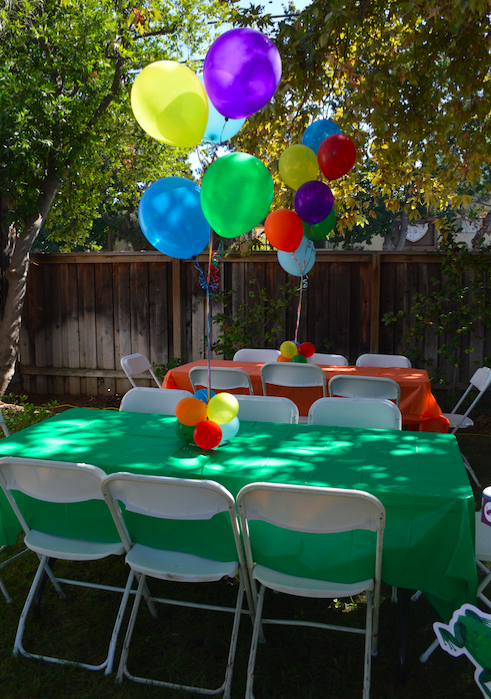 For cake, I kept it pretty simple and cheap with a cute polka dot from Ralph’s. Apparently 1 year olds don’t give two shits whether the cake is Susie Cakes or grocery store straight from the box goodness. They just like to smash it and eat the crap out of it. 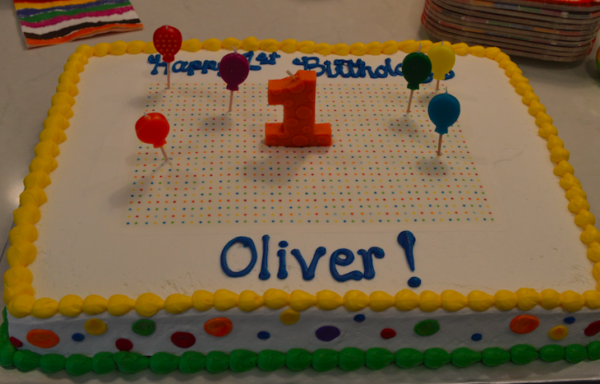 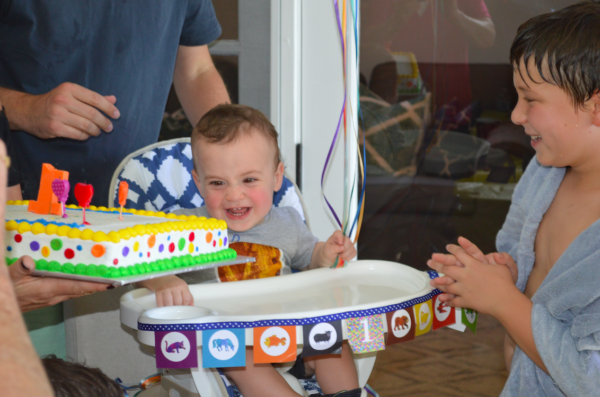 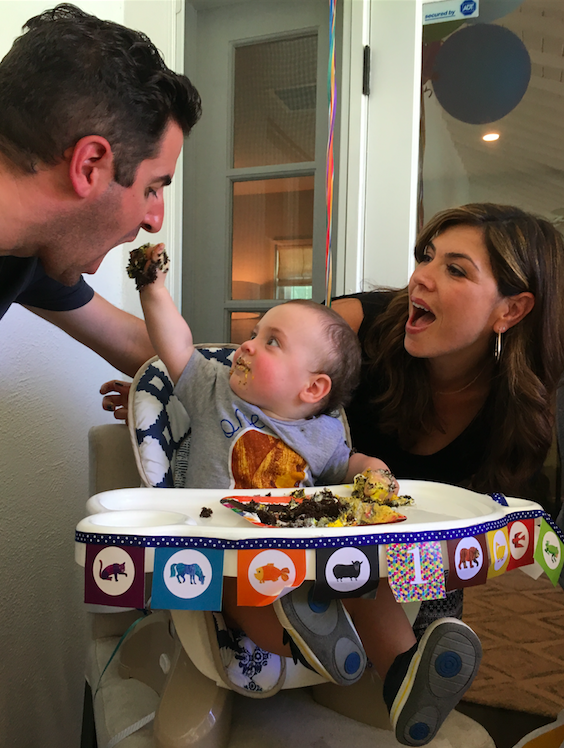 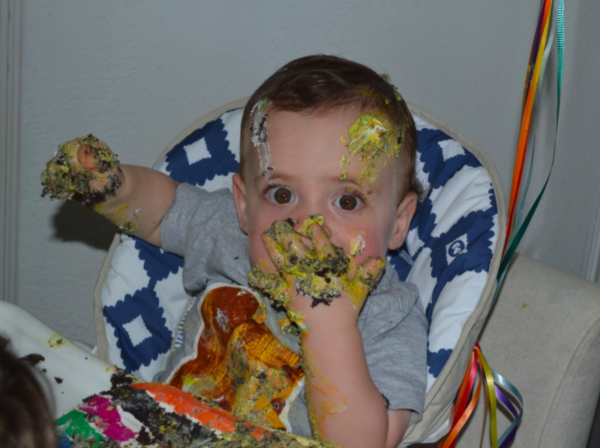 Big Brother Jonah’s bday also happened to be a few days away (apparently January is my month to make bebes) so I did my best to get cute and make a little donut cake for him. Good thing young children don’t mind candle wax on glazed balls. 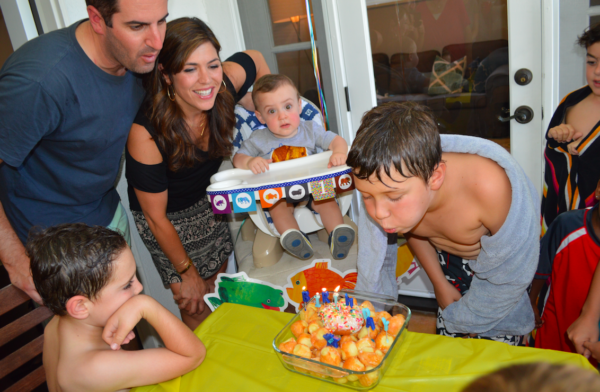 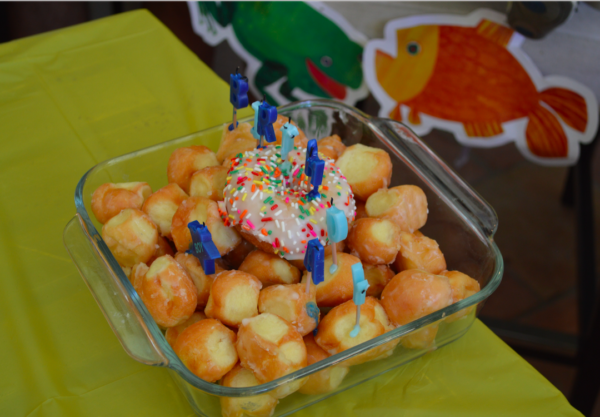 Interested in throwing your own Brown Bear party and raising highly gifted and gorgeous children like me? Sorry, doing/having both will be nearly impossible as my perfection is a natural born skill which has been genetically passed along to my equally remarkable offspring. But I am happy to provide you with links to some of the items used for the party. (See below under the darling picture of my perfect family.) Best of luck though, friends. Best of luck. 😉 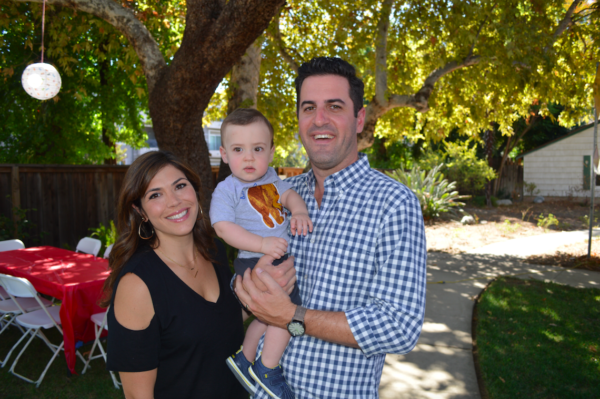 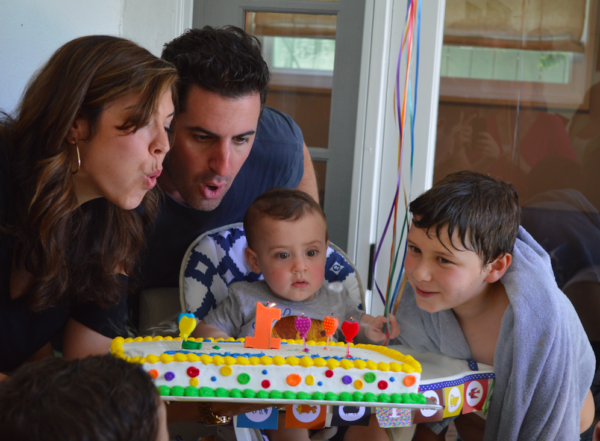 Oriental Trading : From plates to napkins and table clothes and even brown bear brown bear lanterns, they obviously have it all.

From Etsy (all downloadable items. I printed everything at Staples.com. Crazy easy).

FILED UNDER: A Little Life, Food & Entertaining
TELL THE WORLD!

Wine-Tasting and Pizza-Pairing Party with CPK