Ah, it’s March and that means Spring is in the air… Actually, here in Los Angeles, Spring was in the air in December and pretty much all through January…  and I’m pretty sure I spotted Summer one weekend in February…. So forget the air part. It’s just March. And that means a lot of things…

For starters, for the past couple of years, every March I seem to make it my mission to cleanse. I want to clean house. To clean body. To clean mind. Without fail though, having just spent the two months prior to March making excuses, mentally, as to why postponing all my “cleansing” resolutions is probably better in the long run, the LONG RUN actually catches up with me and I find myself high tailing it into “time to get your sh*t together” mode come March 1st.

Here’s the current state of affairs:

I did actually cleanse. Kind of.

Thanks to an extremely popular juice company that offers individual juices, or 3 or 5 day kits, I signed up for a 5 day cleanse. By the end of day two though, I must admit, I was beyond ravenous and couldn’t stop thinking about hummus. Go figure, hummus, of all things. Not one to talk myself off ledges, I caved in and cut up a cucumber (how bad can a cucumber be), and dipped it (okay, COVERED IT) in hummus. Craving satisfied…. Next day, however, I had to be on set for a project I was working on with Lifetime Moms and realized I had only taken two juices (out of 6) with me for an entire day. One of the models on set suggested I just drink lemon and hot water for the rest of the day and/or see if the caterer could just blend my food… so it would be kind of like juice/fluids. Um…. I’m gonna let you sit with that one and give you the opportunity to imagine how much that did NOT happen and how much I was seen grazing at the craft services table for the rest of the day. 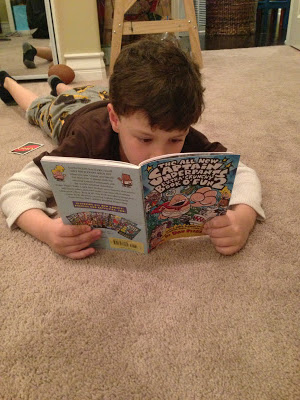 It turns out, “poop talk” can help with literacy.

A month or two ago, I was in sort of a disciplinary standoff situation with Jonah. He was constantly silly, constantly using bathroom language, and even talking back. I had to figure out a way to get back to the consequence basics and figure out what I could take away that was his Kryptonite. (Turns out, not much phases him).

However, one day, I got a report from his teacher that he had been talking back. Apparently, he remarked that what they were going to be doing was “stupid.” I died. Read the whole story here.

Things have calmed down since then and his behavior has shaped up. Not sure if it’s my new-found resolve, or a miraculous maturity development for him,  OR the fact that he had been begging to get hot lunches at school and I told him that if I get a week straight of a perfect report, I’d let him get it. So… The good news: We’re in the 2nd week of hot lunch land and therefore, mornings are now a breeze for me. The bad news: They serve f**king ice cream. I’m telling myself the organic part makes it better. But I digress…

He was recently given a few books from the Captain Underpants series and when I first read one to him, and he nearly choked laughing so hard, I thought…. Hmm. Maybe not the right book for a kid that has a hard time holding back the fart, poop, pee talk. At dinner.

But… last night, he begged me to do a mad libs type section of one of the books and I thought of an idea. 1) If he takes this silly talk outside of this dedicated silly talk time, he loses UNO (our favorite family activity), electronics, TV, and all of these books. At the same time. For one week. 2) He needs to sound out the words and try to read to ME.

Turns out POOP is a wonderful word to teach early language development and reading skills. He nailed it. 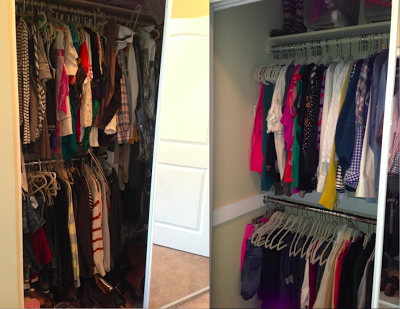 I stopped caring about having an organized closet.  I blame this on the long episodes of Downton Abbey. There’s more important things to focus on…

It’s hard to believe that exactly 2 years ago, I met Robin Saperstein of High Heel in a Haystack, she helped me with a Wardrobe Overhaul, then sent me on my way with a ton of outfit options (from my own closet!)  Since then, I’ve updated my wardrobe cautiously and done my best to keep my closet tidy. But hey, life gets busy and Matthew Crowley and Lady Mary get married and the whole thing goes to poop. (See #2). So, it was time to call on my girl and have her come over and remind me why certain jeans should be left in 2011. 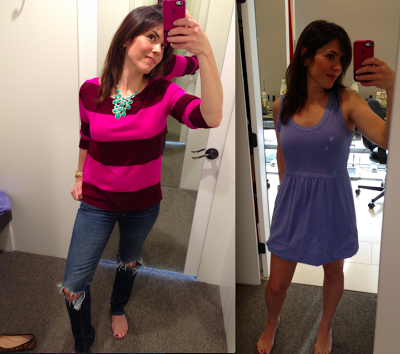 In about 3.5 hours, I had a completely new and organized closet, and could see what I was workin’ with. (Before and after pic above).  According to Robin, I’m actually all set for Spring … AND we even shopped my closet and reinvented some clothing. Why say goodbye to my very first and favorite JBrand jeans with the big gaping holes in the knees, which I’ve already had patched to create a semi distresse
d look, when I can have them repatched and destressed AGAIN?! Additionally, Robin recommended I take a cute purple dress from JCrew and have the it shortened, and the trim brought up to give it a fresh and current look. Not bad for a total of $36 bucks right? (“Before” pics taken at the Tailor’s. Dress pinned. Forgive the “selfies.”).

All in all, Spring is off to a good start. I’m heading to Seattle this weekend with P on behalf of the 2 Days in Seattle Campaign (SO excited) and next week, the story featuring that mysterious trip I took in November will be featured in Ladies Home Journal. Did I mention Tina Fey is on the cover? Feeling pretty lucky right now. Forget New Year’s resolutions. I love March.

Bathroom Talk: The Gift That Keeps on Giving

IT ALL STARTS MONDAY