Preschool. Year two. Definitely not as anxiety producing as last year when everything felt unknown. This year, Jonah seems to be hip to the notion of all things circle time and hasn’t shown an ounce of separation anxiety as I get barely a ‘bye’ after drop off. All this is a relief, of course. The hard part, getting organized and getting a good morning routine down pat. The morning routine… a definite work in progress. But thanks to P-Touch Label Makers, I have to say, I’m feeling on top of my game in the organization department. 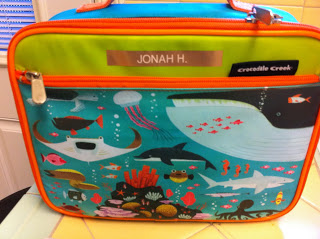 The night before school, Jonah decorated his plastic bin for his cubby and we of course labeled the outside of the bin using the P-Touch-1090, Home & Family Simply Stylish Labeler. Jonah said he wanted his bin to be “the fanciest,” so I upped the coolest cubby ante and chose the white on gold tape. He also chose this tape for the outside of his lunch box. So cute. Since the bin is filled with extra clothes, I decided I was going to summon the spirit of my mother (who loved to label everything) and try the Fabric Iron-On tape. Though this meant actually using my iron for the first time this year, (or decade), I was totally up for the challenge and I congratulated myself for saving other moms several rounds of “Do these Lightening McQueen Underoos belong to Jonah.”
We opted for good ‘ol black on white for his sippy cup. I think it definitely sends a message- Let it be known, children. This is Jonah’s cup. Get your own. 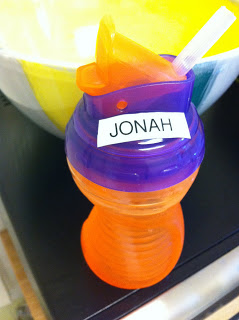 Okay, so now that said child’s belongings are clearly marked, It. Is. Time. To. Organize. My. Office. SERIOUSLY. Though putting my name on files for bills is not nearly as fun as labeling a lunch box! Happy Back to School Everyone!

AFFORDABLE FASHION: BACK TO SCHOOL SHOPPING WITH SEARS!