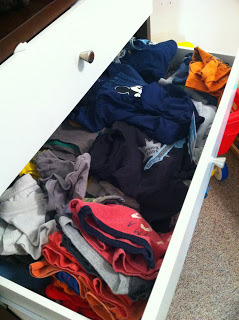 Recently I signed on as a brand ambassador with Brother P-Touch. I was so excited for this opportunity as my own brand of being Perfectly Disheveled is almost synonymous with label making (or at least THINKING about needing to have labels, structure, organization, etc). Anyway, joining forces with this company couldn’t have come at a better time. With a child starting (and now fully in) preschool who is constantly growing, never ending paperwork that comes from divorce (even two years later), and an apartment that needs zsuszhing, love and a new couch (that’s a whole other post), I am ready to GET IT TOGETHER. 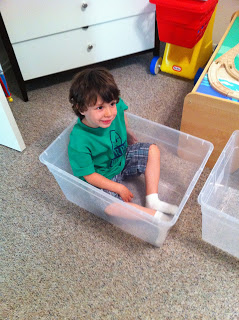 I decided for my first P-Touch project, I’d tackle my son’s clothing. Again, he’s growing at warp speed and he has so many clothes, you’d think he was a Real Housewife of Beverly Hills. Shoes too. I wouldn’t be surprised if one of his converse had red bottoms on it. He’s so pretentious like that… ANYWAY, I decided it was time to clean out his draws and closet and put stuff in bins.
I purchased some rubbermaid bins from the big T… and went through each of his drawers and pulled EVERYTHING out. Later that evening, I made piles of what were keepers and what needed to go into storage. I found that I had a lot of 18-24/ 2T and even 3T stuff that he had outgrown. I had enough bins too to separate pants and shorts from shirts and sweatshirts.

What was great about the process was that I had him join in the fun too. When I told him he could push the letters, he was game to help. It actually turned out to be a great opportunity for him to “type” and do some letter recognition/ spelling. I used both the Home & Office “Simply Stylish” (PT -1290) and the Handheld (PT-1090) label makers, which offer a ton of different designs and tapes with different colors. I kept it pretty simple, but I can see how fun it would be to get “fancy.”
The bins are now in my garage, which btw, looks big, but in actuality is only equipped to hold a Mini Cooper. I have an SUV. SO, lucky for me, I have plenty of storage space to work with… which means the next few months will be spent organizing and labeling anything and everything I can get my hands on.

My next step, after I put labels on Jonah’s drawers, indicating where he can find S-O-C-K-S or P-A-N-T-S (this is a great exercise in learning to read AND letting him make “big boy” decisions), will be tackling my home office. My file cabinet is definitely a little overstuffed… Health insurance info is ending up in Credit Card land and Credit Card land is ending up in Preschool info (though that is kind of one and the same).
Bottom line, ’tis the season to get my type-A butt back in shape. Now if I anyone knows a sponsor willing to help me channel the old type-healthy/exercise/toned arms, I’d love a referral!
For more info on these products visit http://www.brother-usa.com/Ptouch/