I don’t often check my stats to see what kind of traffic I get. Even though I’ve been blogging since 2007, I generally assume that no one except my mom and maybe a teenager lost on the Internet in Uruguay reads my blog. Okay, fine, that may sound a little pathetic, but in all honesty, the dial is very seldom pushed by a new referring URL or traffic source.

However, the other day I noticed a spike— from two places… one took research. One did not. The one that took research eventually led me to a lovely little forum where everyone’s avatar/ photo is of Joe Flannigan. (You remember him from that interview I did on the set of “Change of Plans?”). Right. Anyway, these people like a show that JF was on called “Stargate.” A lot. And that’s what/all they talk about. Well, apparently, my interview with him was the subject of a lot of “Joe is a hot dad” fodder. Listen, I don’t disagree… he is cute…. which is probably why many of the comments in the forum said that it “it seemed like the interviewee was rather taken with Joe…” (Oh, people of Stargate-land. I am a PROfessional…. He’s hot. Ahem. He’s hot).
But back to my traffic….
So the other place I noticed my traffic was coming from was ELLE… as in ELLE! Well, okay… Technically, it was ElleGirl.Elle.com… They’re “junior” site. But still! I thought- Lists, like the one we’re doing on Momversation are surfacing all over the web of top blog round ups, has ElleGirl done one of their own? What list would they do?? Top Blogs that Will Make You Rethink Motherhood? OR Blogs that will make your Liz Lemon-like mom laugh?
But, no… It was not a Blog of the Year list. Rather, it was an article on emerging fall trends… and “Perfectly Disheveled” was linked to (on purpose…?) and used as a a term used to describe the combination of winter fabrics and summer styles…

The article goes on to talk about how to pair contrasting fabrics and styles and how you can update your wardrobe to look this chic too….
Well, Elle Girls coming to my site in hopes of some darling “oxymoronic” wardrobe ensembles, allow me to leave you with this: Let this picture be your guide of the fashion in YOUR forward… 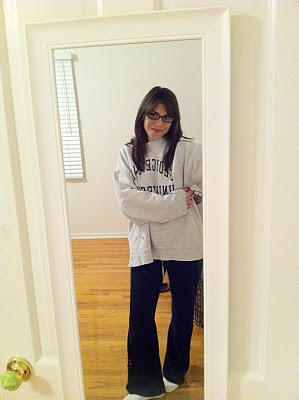 FILED UNDER: A Little Life, Style & Beauty
TELL THE WORLD!

Fall Fashion Favorites and My Obsession with Piperlime