MY TRIP TO THE KOREAN MIKVEH 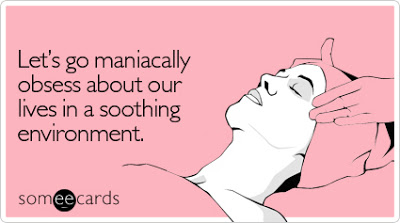 A couple of weeks ago, I experienced a Spa Night like no other…. In need of a night of relaxation and quiet time, I decided I’d check out a popular Korean spa here in town. Many of my friends have been raaaaaaving about it forever… “You have to try the scrub! Get the scrub! You’ll looooove the scrub!”

According to the menu, my “aged skin cells” would be “sloughed away using a traditional Korean technique.” Considering that I’m gonna be 40… someday… (she says a la Sally Albright), I had to jump at this $25 opportunity. Let’s shed some mother effin old skin, people. I’m in. AND, while we’re at it, I thought, let’s take it a step further and splurge on a $40 mini massage replete with an oil and honey rubdown,  a cucumber mask and milky body rinse. Done and done.

Excited for my night of bliss, I invited my boyfriend’s sister KR to join….

With children bed and accounted for, we headed out to the other side of town… Upon entrance, I think both of us were in shock to see a spa menu entirely in Korean, but on the other side of the lobby, a full display of Bumble & Bumble products. Any place that believes in the power of DeFrizz and Brilliantine is all right with me.  I was ready to get my scrub on.

Look, full disclosure, I knew it wasn’t going to be Ojai Valley Inn & Spa, but I guess I was wasn’t completely prepared for what I was about to experience….

We put our stuff into the lockers, get into our robe, we carry our towels (which, oh, were maybe a little bit bigger than a wash cloth) and head into the spa room…. And there it was….

Or shall, I say… There they were.

Let me back up: I am hardly modest. I am not the girl to cover up in a dressing room when the store clerk, or anyone for that matter walks in and I’m hardly the girl at the spa to walk in to a sauna with a bathing suit on. BUT, I was not expecting 1) that the treatment tables were in the middle of the sauna room, thereby exposing body parts of the woman amidst treatment and 2) I wasn’t expecting that the massage therapists, if you will, would be wearing a bra and underwear. Yes. You heard me. A bra and underwear.

Now for those of you that might have gotten here by accident (thanks to the usage of some very graphic words), let me direct you elsewhere… because what I saw was hardly sexy or kinky. It was just different. And I knew as soon as I was directed to a table, told forcefully to lay down and then basically drenched with a bucket of water (which might I add, did feel oddly wonderful) that this wasn’t going to be the “lovely” white robe, lavender smelling, quiet room waiting, spa experience that I was used to.

For the next hour, a middle aged Korean woman scrubbed the bejesus out of my skin from head to toe, and everything in between. No. For reals. I’m not gonna lie: It wasn’t pleasant. It kinda hurt. After the scrub came my “mini massage.” The same woman used what I think was oil and honey as the lubricant and began her work. Let’s just say that with each and every movement, I was wondering what I had done to piss her off. Why is she so mad at my hair???

At this point, I knew I wasn’t going to be getting that relaxing, doze-off, wake up drooling kind of massage, but I went with it. I couldn’t remember if this was something I learned in yoga or in acting school (that NYU Tisch School of Arts clearly paid off), but with each and every shove (because that’s what it felt like), I set an intention. She jabs at my neck: That’s for stress. She bangs on my head (no really, she kind of punched me in the forehead): That’s for worrying.  She pushed on my belly: That’s for over indulging….

It became clear: I was at a Korean Mikveh. I needed to this monthly!

Essentially, with each jarring motion and touch, I released and let go of something. I was cleansing. Or at least I told myself that’s what I was doing.

At the end of the assault, er massage, she slathered me with warm milk and then sent me to the showers. When I came out, I’m telling you, my skin was GLOWING. Soft and smooth would be an understatement- I was silky. I looked in the mirror expecting to be red, raised and blotchy from the scrub and the abuse that seemed to follow. But instead, I looked FRESH. I looked like how I DREAM of looking without makeup.

Post scrub/ beat down, we spent several minutes relaxing in the heated Himalayan salt room (I think thats what it was) and then laying down on a blanket on a warmed jade floor….

Next thing I knew, it was 10pm and we were being kicked out… and I didn’t want to leave. I was soooooo relaxed.