BRIBERY: DON'T SHOOT IT 'TIL YOU TRY IT 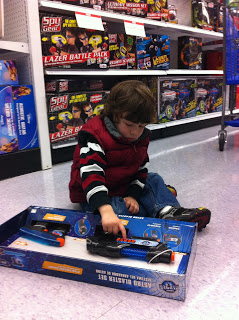 What do you do when your kid won’t sleep? No, I mean WON’T. SLEEP. And I don’t mean a 5 month old who sleeps for 5 hours at a time and wakes up to feed, for the occasional 2 am or 6am feed. (Please, cry me a river). No. I mean, a 3 1/2 year old who can walk, talk and “Beautiful Mind,” him AND you out of any sleeping scenario.

What. Do. You. Do.?
Traditional sleep training doesn’t work because he doesn’t stay put. As stated, said child will waltz right out of room, plop down with me on the couch and ask me what song they’re singing on American Idol.
Crying it out doesn’t work because, in addition to having neighbors, words have replaced tears. On any given night, at any point during the night, I hear, “Mommmmmmmmmmmmy, I neeeeeeeeeeeeed you.” Or “Moooooommmmmmmmmy, I had a bad dream.” Or “Mommmmmmmmmmmy, why are windows square?”
Yes. At any given point during the night, my son can go from a totally typical, desperate, scared place to a full fledged philosophical discussion.
“Mommy, you know what. would. be. so coooo-uhhhl??”
“Whaaat,” I whisper, tucking him back in… at 3am… after changing his pull up he demanded needed changing.
“Iiiiiiiiif. Um, um, um,”
“Shhhh. Yes. Shh…. It’s sleepy time.”
“Noooooooo mommy, no. I have a ca-westch-un.”
“What???”
“How. do. people. maaaaaaaaake…. houses?”
Think about that question…. Just think about it… At 3 am….
ANYWAY, the point that I’m getting at here, is that I need a miracle and am feeling desperate. Without question, it’s time to pull out the big guns (no pun intended) and use BRIBERY. Clearly, taking things away never worked, so perhaps it’s time to GIVE. REWARD. ENTICE.
And since, my child has already had his fair share of cupcakes, lollipops, stickers, movies, and “super cool” trucks, I needed to take it up a notch.
“Jonah, what TOY do you want most in the whole wide world?”
“A shooter gun.”
“A WHAT??!?!??!”
“A shooter gun.”
“What’s a SHOOTER GUN?!” I asked horrified.
Barely able to contain his composure, he says fast and excitedly, “A shooter gun is wh-what- you-push-it. And. You. Push. Green button. And. FIRE! SHOOTS! OUT. And the purple. Button. AND YOU SHOOOT IT. And it goes SHOOOTER. And there’s FIRE. SHOOTS out.”
Before I go any further, let me say this: Guns terrify me. I want nothing to do with them and frankly, the right to bear arms is a notion that freaks me out and disturbs me greatly. That said, I understand that boys will be boys… and though the word “gun” or “shoot” (not to be mistaken with “shit,” which I have been known to say from time to time) is NOT something I have personally uttered around my son, thanks to life, media, friends and just plain evolution: He wants a “Shooter Gun.”
Bribery, I believe in. Guns, I do not. But for the sake of sleep, both his and mine, it is time to pull the trigger. (No pun intended. Again). 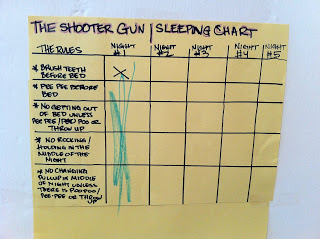 So… Off to Toys R Us we go. I make it very clear what our mission is: He will choose a “shooter gun,” (Which at this point, I pray actually exists and isn’t something that is behind a glass case and requires a driver’s license). I tell him, that after he selects his toy, we will take it home, wrap it up, and write out a chart (see picture) stating all the rules — rules, which he obviously defies nightly and need to be nipped in the bud. (FYI, we came up with these rules together. And yes, he did make it clear that he should be allowed to call me or get out of bed if he also has “Fro Up.”)
We went over the plan a dozen times before we got to the store, and a dozen more inside the store. THANKFULLY, after rows of totally inappropriate toys that could actually harm a child, we found what I deem: A SHOOTER GUN. 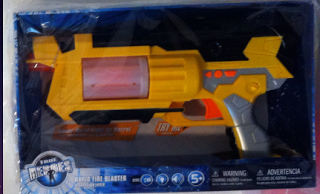 It basically, makes “Buzz Lightyear noises!” It’s called a “fire blaster.” The middle turns around, lights up, and makes Space Mountain sounding noises. OKAY, fine. NOW we’re talking. A boy toy I can wrap my head around.
Well… I’m pleased to say, that night one was a success. And as I type this, the beginning of night 2 seems to be working too…. Many people asked what I’ll do after 5 nights… if he’ll expect more bribes… Well, I have no idea. Feel free to shoot me some suggestions. No pun… Well, you get the idea.

IF THAT AIN'T LOVE