LOSING NEMO: A YEAR IN PEACE

4
Last weekend, a friend of mine told me that as a parting gift at a child’s birthday party, her 2 year-old son was given a goldfish. I had 3 responses, consecutively:
#1) Are you fucking serious?!
#2) Wow. That’s cool.
#3) Did they give you a bowl?
No… she said. They did not. No bowl. They just handed her a fish IN A BAG, and said thanks for coming. That was it. I tried to spin it in my mind… Perhaps that was a clever and cool alternative to Silly Bandz, candy, or some chatchke from Oriental Trading Company (seriously, spare me the junk people). But I never was really able to decide how I felt about such an extreme parting gift that a child really won’t be able to “part” with anytime soon… unless they have parents like me, who let fish die and/or send them to fish heaven.
Anyway… all of this reminded me of our own dead fish incident of 2010. It’s hard to believe “Nemo” has been gone a year. In memory of losing nemo, I thought I’d share with you an old post. Enjoy. And never give me a fish as a gift.
——–
Originally posted: February 9 ,2010

Last week, our lovely and adorable babysitter Ash-a-wee texted me to see if she could buy Baby-Ko a fish. Hmm. This is tough…. On one hand, a goldfish would be the perfect pet for us to have as I, a) am not an animal person and, b) Baby-Ko is fascinated by them. On the other hand, a) I am not an animal person and fish are right up there with birds and b) I have killed every single fish I have ever owned, not including the one from the very intentional murder/Purim incident of 1985. In fact, I have another confession: When I was 13, I killed my sister’s goldfish with this fake “Cinderella” perfume she had in her dress up chest, just ‘cuz. Point is, me and fish, notwithstanding sushi, don’t do well together.

BUT, Baby-Ko… sweet Baby-Ko… I want to give him the world, and if that means feeding some slippery slimy fish and skimming out poo, then goddammit, I’ll (vomit in my mouth) do it.
When I got home from work that night, Baby-Ko opened the door and beamed, “Mommy! Ash-a-wee bought me fish! In my house! Come, mommy, come!”
He marched me in to the living room. There, on the coffee table was a (dare, I say it?) a pretty-ish Black “Beta” Fish…. Living in my VERY pretty Kate Spade round vase. “Oh, goooood…. you found a bowl,” half laughing.
Ash-a-wee told me she’d be going back to Petco tomorrow to pick up a proper bowl and some rocks, and also: She would clean the bowl and feed him when she came. PHEW. The fish has a chance at living.
“What did you name him?” I asked.
“Nemo!” Baby-Ko exclaimed. “He is Nemo, Mommy!”
“Nemo. Perfect!”
Though I desperately wanted to rename him something clever, or something even obvious like ‘Bemo’ (short for Black Nemo, which potentially sounds offensive), I shared in his pride over his very first pet. Nemo it is.
From the beginning, Nemo seemed to be a “slower” more “static” creature, if you will, never really moving from one place (even when Baby-Ko put his face up to the vase and shouted his name). However, it was to my shock and dismay when less than 24 hours later, I returned from a party and my mom whispered to me, “I think Nemo is dead.” Shit.
Tap. Tap. Tap. Nothing. Nemo wasn’t even belly up… Rather, he was on the bottom of the bowl. Upside down. Dead. Asleep. For good.
“What happened, Mommy?” Baby-Ko said, noticing my concern.
“Nothing, love. Nemo’s sleeping. Let’s go play with your trains.” Not prepared to talk about life, death, and beta fish heaven, I redirected him to the other room…
A few minutes later, we got a call from T-Ko asking if we could Skype, as he is out of town for work. (BTW, I guess now is as good of a time as any to tell you that T-Ko and I separated last May and are getting divorced… At some point I’m sure I’ll share more. But for now, let’s honor Nemo… :-)) Anyway, over Skype, which we routinely do, we told him about Nemo and that Nemo is “sleeping” (wink, wink). I was fully prepared to do a bait and switch of Nemo the next day, but T-Ko had a different idea.
“Baby-Ko, look at my view,” he pointed the computer camera out the window to the river. “Daddy’s hotel is on a river. You should send Nemo to the river!”
Gulp.
“Go with Mommy to the bathroom and you can pour Nemo in to the toilet and flush him down to the river so I can see him.”
“Good idea, Daddy!” I said, with a smile like Chandler Bing.
In to the bathroom we marched… Without much warning, I picked up my very pretty Kate Spade Vase. Swoooosh….
“Bye bye Nemo, go see Daddy!” I said.
Baby-Ko stuck his head to the toilet, “Where Nemo go?”
“…To come see me!” T-Ko said, “I’m going to go down to the river and get him.”
A few more questions and love-you’s later, Baby-Ko and T-Ko finished their chat.
—
Now every time I go in to the bathroom, Baby-Ko does look somewhat concerned. Because Baby-Ko’s only 2 years old, I can’t say that my first choice would have been to send Nemo to Savannah to see T-Ko and the river… But I admire T-Ko’s quick response to putting the fish to rest for good.
In the meantime, any suggestions for how to explain to said 2-year old that when I sit down
on the toilet, Mommy isn’t “sending her poo-poo and pee-pee down to the river to go see Daddy???” 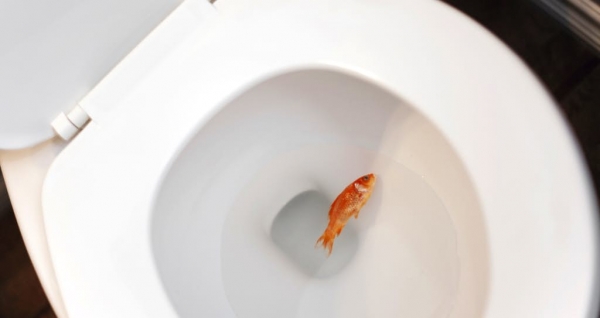 THIS IS HOW IT STARTS