For the past few weeks, Baby-Ko has woken up saying “Mommy, I’m up from my dream! Come get me!” As I pick him up out of his crib (yes, he’s turning 3. No, he’s not in a big boy bed yet), I do my best to cheerily ask him about said dream.

Me: “What did you dream about?”
Baby-Ko: “The jungle!”
Me: “The jungle?!”
Baby-Ko: “Yaaaaaaaaaah, the jungle. And, and, and, the ocean!”
Now before you marvel at how amazingly imaginative my young boy is, I must confess: He did not come to these brilliant visions and landscapes on his own. I sort of fed them to him… At some point, during a typical nightly sleep battle, I encouraged him to close his eyes and think of all these lovely places… I promised him, that in the morning, “when the moon goes down, and the sun comes up,” we would talk about our dreams… And I did. In the morning, I asked him about his dream. He just said “it was good,” then asked me what I dreamt about…. Well, one day I dreamt about a lake, the next day it was an ocean, another it was a farm, and so on…
Fast forward to this morning…. He dreamt about a monkey biting him and a lion named Fred. He caught on quickly.
The point to me sharing this is that it’s what happens AFTER our little dream sequence, if you will, that will hopefully matter the most in his life and in mine. Every morning, after he gets out of bed, he comes in to mine, I offer him a “snackie,” he chooses a show to watch (well, it’s not like he chooses any show. It’s not like he’s like, “oh mom, you recorded, Weeds. Let’s watch”), and I go back to sleep as long as humanly possible….
I gently try to remind Baby-Ko that there’s an entire bed, and he should move over…

But he has made up his mind… he’s staying put…. 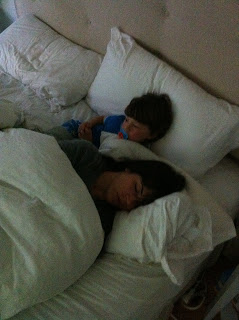 Sometimes he literally puts his head on top of mine. Skull to skull doesn’t feel great and, to be honest, is kind of annoying… 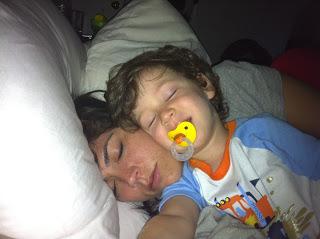 IF THAT AIN'T LOVE

PARENTING: I COULD LEARN A THING OR TWO…