Discipline. The D Word. Something I’ve never been very good at when it comes to myself (diet, exercise, french fries etc.)… and something I’m realizing that I’m not so great at when it comes to my son. Shortly after Baby-Ko turned 1 and started “testing,” I remembered the pride I felt when a mere look or simple redirection of attention settled his urge to do the “don’t” and I certainly didn’t need to use the evil “N” word. I had mastered parenting at an early age (both mine and his), and I thought whoever invented “time out” could just suck it. My kid’s GOOD. Really good… which according to Wacky, you’re never really supposed to say because it actually gives them this whole personality disorder or something like that…

But I digress…
The point is, Baby-Ko is now 2 and because I’ve been back to work full time for the last year and because I no longer have any Wacky’s (other than my wonderful family members) coaching me through the (not-so) “terrible two’s,” I feel like I’m completely clueless when it comes to the discipline department these days. (Certainly, you remember the Vacuum incident that rocked the nation….?)
Baby-Ko’s newest thing is to swing his beloved (and filthy) blankie in the air… first he starts out doing it cutely, as if he enjoys feeling his blankie around his body, side to side. Then he starts getting closer to people or things, and the blankie sort of turns in to a whip. I suppose it could potentially really hurt another person, but mostly it’s just annoying and I’m not sure why he does it, and I’m certainly not sure how to get him to stop– as taking his blankie away isn’t an option…. I don’t think… (is it???)
For whataver reason, the other morning, Baby-Ko decided to test his limits again with said blankie. Carrying it in his little hands, he marched right in to the bathroom, lifted up the toilet lid and dropped it in the bowl.
First, he felt like ballsy.

Then, he was proud….

Then, he was screwed…. 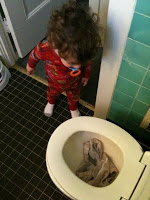 Not knowing whether to laugh, discipline, or be grateful for the fact that the toilet had JUST been flushed, I shook my head, said nothing, got a plastic bag, removed the now ass ridden blankie from the toilet, and carried it right to the washing machine.
For the next 45 minutes as the washer and dryer removed the germs and frayed corners that my son so derives comfort from, Baby-Ko was devastated and distraught by his decision. I did my very best, as he stood in the laundry room sobbing and pleading for his blankie to come out, to explain the consequence of what happens when we put things in the potty (that don’t belong). But honestly, he didn’t care…. My normally happy son who loves nothing more than to help me “do laundry,” was being tortured by a great white blankie eating shark.
Fortunately, in a few weeks Wacky is holding a lecture for Two Year olds (well for the parents of two year olds that is) and I am attending. I very much look forward to a little Wacky gospel… Of course, I’m not sure she’d approve of redirecting a tantrum with YouTube videos or Sesame Street… Shh. Let’s just keep that between us for now… okay?

IT'S JUST THE AGE