THE GLASSES THAT NEVER DIE

If there is one thing in the world I can’t be trusted with, it is A PAIR OF SUNGLASSES. Plastic, wired, black or tortoise shell, doesn’t matter: I will break them, lose them and/or generally f*ck them up. I’ve learned my lesson the hard way…. buying trendy, expensive, and the requisite make-my-face-look-skinny-frames, only to sit on them (accidentally), drop kick them (accidentally), or lose them (accidentally, of course).

The worst example of nice glasses gone bad was a couple years ago… Before a vacation, I went out and bought a fab pair, got to said (super sunny and gorge) destination, only to discover that I had forgotten them along with my entire wallet and ID at home too (but that’s a whole other story).  Fortunately, the hotel we stayed at before leaving for a ten day cruise had a (not so) plethora of sunglasses for me to choose from. The majority of them made me look like a Golden Girl, but I did happen to find one pair for $15 bucks that worked….
Well, 2 1/2 years later, those effing glasses are still working. I have sat on them. I have drop kicked them. I have probably even run my car over them. They are barely hanging on, but by-golly, these bitches are still in tact. Kind of…. Wellllll, not enough for me to forgo the TRULY fabulous pair of grown up sunglasses I just bought (don’t worry, they came with a case that could take a bullet), but at least enough for Baby-Ko to look ridiculously cool in the morning…. 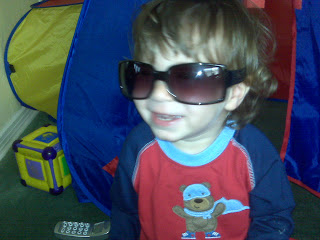