On my way home from a meeting, my phone rang. It was my babysitter. She was in tears and inaudible. Then I heard, “Hi, Jennifer… This is Officer (???) with Los Angeles Fire Department. Your babysitter and son have been in an accident.”

I clutched my wheel.

What happened in the next 15 minutes is a blur: The Officer asked if I’d like them to go to the Emergency Room via ambulance (which he assured me wasn’t necessary)… The Officer told me where they were located… . He put Jonah on the phone… Jonah said, “Hi, Mommy,” in the softest and sweetest way… Jonah put the fireman back on the phone…. The fireman told me to drive safely… I told him I’d be there in 15 minutes… I asked again what happened… He told me: HER CAR FLIPPED.

At some point, not wanting to, I hung up the phone. I needed to get to my baby. I heard his voice, so he’s okay. But the car flipped???? HOW can they be okay? But they are, I think. I pray.

I called his dad, then my boyfriend P, then my mom. Everyone knows. Everyone is on their way.

Thank god everything in Los Angeles REALLY IS 20 minutes away from each other.

As I got closer to where they were, the panic set in. For 2 blocks, cars were backed up. I could see at the intersection that the street was closed off and cops were diverting traffic. Up further ahead I could see fire trucks and ambulances. And when I stopped crying and snapped out of it, I could see a red car on it’s back, with the wheels in the air.

I stopped breathing again. My boy. My boy was in that car.

I screamed this to a car trying to merge for the diversion. She couldn’t understand what I was saying. I screamed from the center of my being to roll down her window and LET. ME. OVER. MY. SON. WAS. IN. THAT. ACCIDENT.

She let me over. LA Drivers are the worst.

I got through the barricade and parked. And ran. 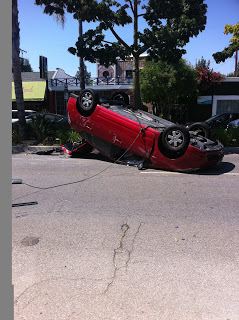 Jonah  was standing with P’s sister. I clutched him. He burst in to tears and I became unglued.

He was in THAT CAR?!

His eyes were red. The fireman came over. The redness was from the gun powder in the airbags. But he is okay, they think.

They tell me a complete stranger, a woman, pulled him out…

They tell me the CAR SEAT SAVED HIS LIFE.

They tell me they’ve seen worse…

We learn that it was the other driver’s fault… But blaming someone as I pick up a breathing, healthy, 4 (almost 5) year old and wrap my arms around him tight seems unnecessary right then and there…

A half hour later, we were giving a nurse at the ER details of his accident.

We waited for about 4 more hours until he was evaluated by the doctor. Then a trauma surgeon. Then the chief of trauma surgery. Jonah told every doctor that they were doing the same thing. “The last doctor looked into my eyes too. Someone needs to do something different. How come you all do the same thing?”

He made everyone laugh.

The “repeating” doctors came to a consensus: He really was okay and no intrusive imaging or observing overnight was necessary. He could go home. HE. WAS. OKAY.

I was happy that they repeated this. And I am tortured by the thing they also repeated: “His Car Seat Saved His Life.”

We were just about to get him a booster.

That night, 4.5 hours after his supposed bedtime, I kissed him tighter and breathed prayer into his entire body.

He was in THAT car?


The next morning, Jonah insisted on going to school. Nothing hurt. Nothing felt funny. Nothing except talking about the accident bothered him.

He wanted to go to school. As a cowboy. And I didn’t stop him. 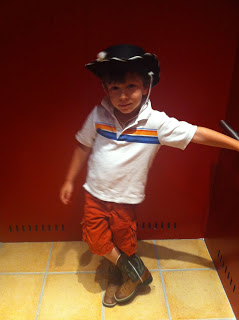 I was told the next day by his teachers that he requested some time to sit down and tell the kids after playing in the yard about “the crash.” He turned off the lights. Sat all the children in a circle. Got out two toy cars and reenacted their accident.  He told them how important it was to wear a seatbelt and stay in a car seat. NOT a booster. He told them that every doctor did the same thing but he went home and is okay. He asked them if anyone had questions. The children, of course, got excited and started talking about cars and crashes they had seen. Jonah told them to stay “on topic.”

He’s okay. I…. I am still in shock. Still in disbelief. Still perseverating on the “what ifs.”

Everything feels more fragile and more important now. And while I hope to close my eyes again at night without seeing the car flipped and my son crying, I know I will never take for granted another moment of time spent with a cowboy named Jonah again.