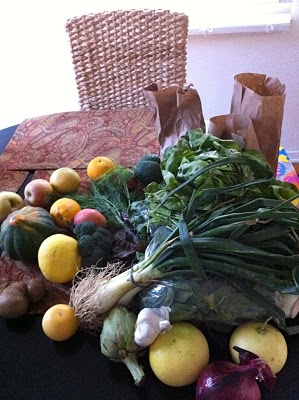 A couple months ago, I was approached by Stacie of One Hungry Mama to take on a recipe swap. After making Stacie’s spiced up latkes and confessing that just weeks prior, I nearly burnt my kitchen down thanks to an inability to toast bread, I started to feel like I needed to spend more time in the kitchen. After all, cooking is therapeutic and I of course want to make dishes that my son loves because it’s something only his mom can make. (I’ve come to terms that my meatloaf or spaghetti sauce won’t win awards).

The point is, I want to cook more. Expose Jonah to more fruits and veggies than just spinach and broccoli, which luckily he enjoys. So when Reisha Fryzer, founder of Farm Box LA approached me I was thrilled. Farm Box LA delivers weekly organic produce to homes, restaurants, and institutions in Los Angeles. She sources from different local farms in order to put together an abundant farm box. It is aimed for ultimate health and wellness.
When Reisha made the delivery, I was so excited but I must admit, overwhelmed. Like I said, I’m used to a head of broccoli, a bag of baby spinach and maybe already cut up butternut squash depending on how well stocked Trader Joes was that week. What was I going to do with fennel, acorn squash, Swiss chard, butter lettuce, Maui onions, and a ton of other fresh fruits and veggies? I mean, I knew what I should do, but it felt a slightly daunting. Reisha shared some recipes and I also hit up people on twitter and facebook for ideas. 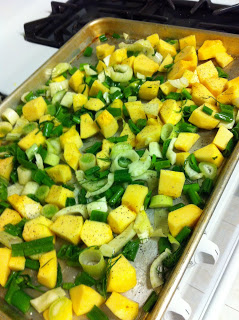 I decided to take a little advice from everyone and came up with my own plan. I decided to roast the fennel, acorn squash and Maui onions together with a little olive oil, salt and pepper. SIMPLE. (Why don’t I roast everything???)
The Swiss chard, I sauteed with a little maple syrup and crushed red pepper. Delicious… though I admit, Jonah was not so in to it.
The one thing I did that was a major rookie roasting move, was use the stalk and leaves from the fennel- not just the bulb. I don’t think it made it any worse, but now I know.
Anyway, LOVED that everything was organic and hand picked by Reisha. In my head, and maybe even in reality, everything tasted CLEANER. If I could tailor this service, or one like this so that I had enough fruits and veggies for me and a 38 lb picky eater, and not more than I’d ever really eat, I would totally do it. It seems worth the price. And the time it takes to rinse and cut up the veggies.
In the meantime, I plan on exploring all the other things I can roast. It’s just so friggin‘ easy and tasty. I think I’m going to have to break out the Ina Garten Roasted Chicken Recipe that I used to make many moons ago. If only I could find an organic chicken farm that would deliver an already clean chicken for me, then I’d really be cookin‘….