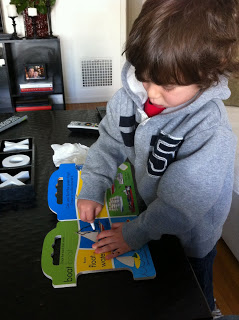 In one of my many Wacky’s classes, we were told that telling a child how “good” they were or how amazing everything was that they did would actually be damaging. “Don’t label your child,” Wacky would say. Instead of them doing a “good job” when they built a tower of blocks, you should praise them for their efforts… their concentration… their architectural ingenuity. Blah blah blah.

Here’s the thing, to some degree, Wackidoo has a point. If you’re constantly telling a child that they’re good, when they do something not so good, they will feel bad. And apparently, there’s something wrong about a child considering themselves to be “bad.” (like they turn into serial killers or something. I have no idea). Anyway, I totally understand how too much praise can actually lead to a child having little self confidence– if their focus is on a result and on a reaction (from a parent). However, as a parent, I find it soooooooo difficult, especially during these developmentally magical and slightly crazy making years, to not kvell over his every move.
For instance, today we (he) spent about 30 minutes tracing in a new book Grandma L got him. Initially, he wanted my help as he didn’t think he could do it (and wasn’t entirely comfortable or sure how he wanted to hold the marker). After a few tries though, he was on his own and tracing all the pictures. Now, I only know what my 3 year old is doing so maybe it’s not so impressive, but to ME, I was floored by his tracing ability. I found it hard not to “Wow” and “That’s so great, Jonah!” him with every stroke.
Do you think everything your child does is magic? How much praise for a child is too much?
… I mean, I was so proud of him, I decided I’d film some of it to send to grandparents and great grandparents who I know would be equally proud of their budding artist, Rhodes Scholar, and future Justin Bieber. (Being a pop culture icon is just as impressive as studying at Oxford these days, isn’t it?) Of course, it didn’t take long until the 3 year old interested in all things poop became entirely DISINTERESTED in mommy’s praises….

I’ll have to figure out a different way to label this sort of behavior…. 😉
Hey! BTW, we’re giving away $150 on Parents Ask to Amazon. Leave a comment on the video, telling us your favorite children’s book and you’ll be entered to win. Oh and ignore my iphone in the shot. I promise it’s not next to me during “quiet, reading time.” 😉