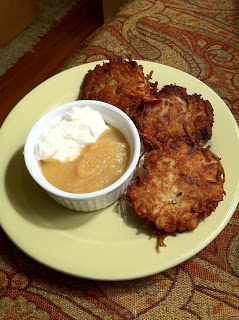 In 2nd grade, I can remember having a pen pal and thinking how amazingly special it was to connect with a little girl in Russia who was living a polar opposite life (but probably had the beginning of a mustache like me). Nearly 30 years later (minus 7. You do the math), perhaps it was my tale of burnt toast and hot firemen that sparked (no pun intended) the attention of Stacie Billis of One Hungry Mama … But alas, I think I have a new pen pal again. Though we live on opposite coasts, I’m not so sure our lives are polar opposite (though I’m certain she knows how where blades go in a Cuisinart… but more on that later). Our biggest common denominator? The desire to create food memories for our children… The desire create new family traditions, especially during the holidays…

After reading a few posts, including the burnt toast incident that rocked the nation and a tweet about me making my very first pie over Thanksgiving, Stacie reached out to me about doing something collaborative for Hanukkah. I was so touched and honored (and scared), I had to take it on. Not to mention, I’m certain that my Nana’s latkes are gods gift to man so it was with pride that I could hand over that recipe to her. In exchange, Stacie shared her latke recipe— a work in progress, as she says… a recipe that improves every year.
Though Greek, Stacie grew up in a predominately Jewish neighborhood and longed to be Jewish her whole life. Apparently she even asked if her family could swap Hanukkah for Christmas (I totally get it BTW. 8 Nights. 8 Gifts. Oily food. Done). Stacie married a nice Jewish boy who also feels that family culture and history is important to share with children.
“We’re starting our own traditions, secular, Greek & Jewish one.
And we’re making the Jewish ones up along the way.”
I think I love this girl.
Okay… so let’s cut to the recipe chase. And a CHASE, it literally was…
From not knowing how to get the damn blade in to my Cuisinart…. 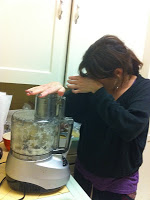 This was one awesome recipe swap and adventure. All in all the latkes turned out to be delicious. The second batch was definitely better… But like my new dear foodie friend, I too am a work in progress… Thank you, Stacie! Happy Hanukkah Everyone!
To read Stacie’s story about our swap, visit Babble’s Family Kitchen.

· 2 lbs russet potatoes (about 4 large), shredded with the large wholes of a box grater or the shredder attachment of your food processor

· 1 onion, grated in the same way as the potatoes

1. Melt the butter in a small skillet. Add the matzo meal or breadcrumbs and toast until they turn golden brown.

2. In the meantime, roll the potatoes in a kitchen towel (I find that terry cloth works best) and squeeze out as much water as possible.

3. Combine toasted breadcrumbs, potatoes, onions, salt, pepper, mustard and eggs in a bowl. Mix well. This is your “batter.”

4. Heat oil a large pan. You want it to come up the sides just about 1/4″–it should be enough to coat the entire bottom and then some. Add about a palmful of batter to the oil, flattening a bit. Repeat. Be sure not to overcrowd; depending on the size of your pan, you’ll fit anywhere from 4-6 pancakes in a batch. Allow one side to brown before flipping each pancake over. Brown the other side and move cooked through pancake from the pan to a plate covered with paper towels to drain. Serve hot. I like serving these with homemade apple sauce (I make it right in the slow cooker) and sour cream.