12 DAYS OF MOMMY: WE'RE OFF TO SEE THE WIZARD 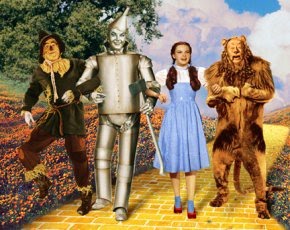 Well… I had every intention of taking little J to see “Tangled” this morning (his first movie in a theater), but I figured the other moms/children would not appreciate sneezes and snot rocketed in to the air without any attempt to shield from others. And since it was the morning of Christmas Eve, I worried that his cold might eventually reveal itself as a rip roaring infection of some sort– so I decided it would be best if we went to the doctor just in case.
Yup. Just a bad cold.
So, we ended up spending the day at home relaxing and were later joined by family and friends for some traditional Christmas Eve chili. (I just made that up. I suppose there’s nothing traditional about chili on Xmas Eve whatsoever. But it at least deserves a mention because it was topped with Frito’s… and anything topped with Frito’s deserves a mention).
So at some point in the last week or so, “Wizard of Oz” happened to be on TV and I guess Jonah caught a glimpse…. Well, I guess our days of Elmo, Sid, Wyatt and Clifford are done. Those guys are bor-ing. Right now my boy is enamored by Dorothy, the Tin Man, the Scarecrow and even the Wicked Witch. Oddly, nothing in this movie scares him except the Lion…. which basically means there’s only about 3 scenes we can watch in the entire movie. Nonetheless, I’m enjoying watching this with him. Perhaps we’ll try “The Wiz” in a few weeks…. NOT. 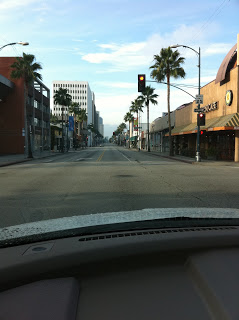 Day 8
Christmas day and LA is a ghost town. Great day again with family and friends. Finished it off with a movie– “The Fighter.” SO good. Christian Bale’s performance was so incredible that it kind of makes up for the fact that he went bonkers on a crew member last year.
In other news, I haven’t stopped eating since the 17th and I fear that my yoga pants will have to be surgically removed from my body as 12 Days of Mommy has rapidly become 12 Days of about 5 showers and 2 changes of clothes.
Oh, yes…. I am the ghost of disheveled past….