12 DAYS OF MOMMY: THE LAKE SHOW 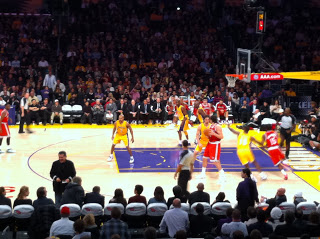 Back to Staples Center… this time sans child and characters skating (and falling) on ice. It was an adult night… A night to see Kobe, Lamar, D-Fish and crew take on the Milwaukee something or other…. Apparently it was a terrible game. An atrocity (the Bucks won by like 20 something points), and Kobe even got thrown out for two technicals. BUT I had a blast as a) our seats were incredible and I was in good company, b) I made Charlie O’Connell (the drunken/Bachelor/brother to hot Jerry O’Connell) laugh while in line for a French dip sandwich and c) like any good Laker game, having nothing to do with how they play, there were some good celebrity sightings. No Jack Nicholson, but I’ll take “Jack Dawson” over him any day anyway…. 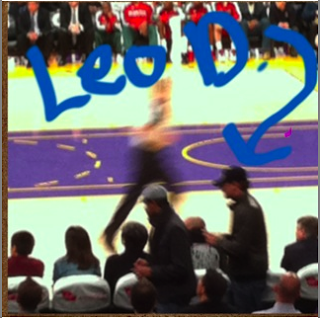 *Sports fanatics and great wives/girlfriends who claim to “like” watching Sports Center (Nooooo, you do. You really really do!): Don’t get me wrong, I do enjoy the Lakers for more than their pretty faces and wives with addicting reality shows, I do. BUT, the cheerleader (that never was) and truck driver swearing/ true sports fan thing doesn’t really kick in until May/playoffs. That is… if they make it to the playoffs or finals. If they don’t, well… then….ehh. Sorry NBA… I’ll be “Keeping Up” with a different kind of season finale…
Spoken like a true LA native… 😉