12 DAYS OF MOMMY: DISNEY ON ICE 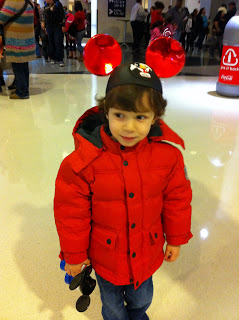 It was a lazy, lazy morning. The kind that was so comfy and so perfect, I wondered if i was doing something wrong. I could get used to this…

The big event of the day: taking Jonah Downtown to Staples Center to see Disney on Ice. Not quite understanding the concept of “a show,” he kept asking if he would get to skate at the “ice skating school.” (Apparently his only understanding of ice skating at this point is from Murray on Ses. Street going to skating school. LOL).

My bf and I were so excited to tell him that this was where the Lakers play. “Kobe DRYant?” he asked.

“Yup, Kobe DRYant.” (Incidentally, am I the only parent who actively chooses to let their child pronounce/say things wrong because it sounds so cute?)

The minute we walked through the doors of Staples Center, the yellow, purple and Jack Nicholson-filled stadium was no where to be found. Oh no, it was all things Disney— and they get ya at the door. Literally. We didn’t take more than 15 steps until J spotted a vendor selling an overpriced plastic chatchke that lights up and turns children in to “gimmee now” zombies. Equally enamored, and apparently made of money, his every wish was my command. Thankfully he settled on a pair of Mickey binoculars, cotton candy that came with Mickey ears, and a bucket of popcorn. $42 later, we were off to our seats.

Then the magic happened….

Watching Jonah’s eyes pop when the characters emerged on to the ice was priceless. He marveled, waved and cheered and… holy shit: he sat still for two hours!!! 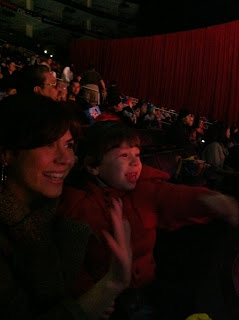 Though he did love seeing his favorites like Mickey, Buzz, and Woody dancing and singing… on ice… I would say Jonah was mostly enthralled with the set changes and curious about where the characters were disappearing to when they skated off the ice behind the curtain…

For me, I’ll be honest, though beyond excited to be sharing something special like this with my son for the first time, as a whole, it was hard for me to not think about what “Mulan” or “Snow White” really wanted to be when they grew up. Watching them lip sync to the songs and stumble/fall every now and again, reminded me of a cruise ship performance. In fact, I wondered how many of these actors even spoke English. I don’t mean to sound critical or cynical– it was fun! I’m just saying, “Aladdin” didn’t exactly skate like Johnny Weir that’s all.

There were definitely some “scary” parts for little J…. Like the dancing brooms during Fantasia… or the spooky skeleton greeting other evil characters like Captain Hook and Cruella De Villa. Much like his first time on Pirates of the Caribbean, I held him tight, told him that it was all pretend and delighted in knowing that these would be the memories shaping his imagination and boyhood….

All in all it was a fun day and a great way to start 12 Days of Mommy.

PS. Minute by minute, I think this is quickly turning into 12 Days of Eating. Yikes.