12 DAYS OF MOMMY: BOYS WILL BE BOYS 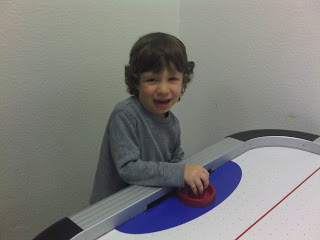 I think yesterday was the first time I realized how different my life will be raising a kid with certain behaviors… Lately, it’s been hard to know what is just 3 year old behavior vs. circumstantial/reactionary behavior. But yesterday, I got a glimpse of the kind of a behavior that generally makes up and defines my kid:

BOY BEHAVIOR.
Another rainy, rainy day here in Los Angeles… We met my dear friend Carin Goldstein of BeTheSmartWife and her son E at an indoor playroom. I think the highlight for Jonah was discovering an air hockey table and really trying his hardest to play. Watching him wait eagerly for his turn, and being told by an older boy that he was ruining the game (as he kept purposely shooting the puck in his own goal because it was funny), touched me in some way….
After the playroom we went downstairs for a bite to eat …. well, Carin, E, and I ate…. Jonah was on a “poo poo/ pee pee” song and jibberish kick in an effort to make E laugh…. And boy did he ever! The two of them were as silly as can be. Initially, there was an effort on my and Carin’s part to curb their behavior (“we’re in a restaurant!”) but at a certain point, it was just too plain funny and well, at 4:45 on a Monday, the place was empty… and I’m on kind of on vacation. Sometimes it’s okay to just let things slide…. right??

Have at it boys!