Last weekend, I took Baby-Ko to Disneyland for his very first time. Knowing full well that the idea of Disneyland really would mean nothing to him until he actually set foot on Main Street and experienced the joy and churros that is the magical kingdom, I had been making a concerted effort to point out the iconic and very magical Disney castle at the beginning of various movies. (Who am I kidding. We really only watch one. Mary Poppins). Of course, I had concerns about how he would handle the big D– the crowds, the line, the (no) nap… But, seriously, the minute we pulled in to the parking lot and got on the tram, (which btw, I could have totally told him that was Disneyland- he loved it so much), I saw the sparkle in his eye that I had hoped he would have and it was GAME ON!

From the Jungle Cruise to Small World, (which honestly folks, as an adult is slightly depressing and looks more like an impressive version of a 6th grade class project than I remember it as a kid- with the ceiling tiles crooked and the felt of the “dragon” outside of “China” a little askew), the boy LOVED D-Land and I loved it more seeing it through his eyes. Some of the highlights and low lights…
We started the day off with the Breakfast with Characters. 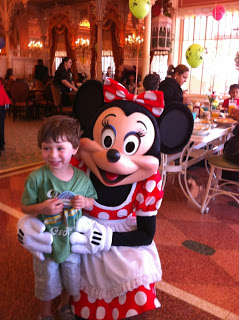 Minnie was definitely the star of the show. I was shocked to see how much Baby-Ko loved the characters. He hugged them tightly and once he realized all of his favorites “lived at Disneyland,” he was on a mad search for Buzz Lightyear…. Who only made an appearance during the exact moment Baby-Ko napped in his stroller. 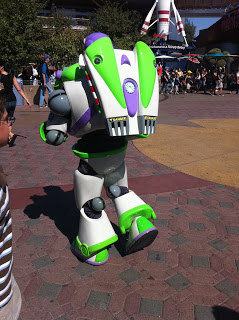 **Side note, I should add that ironically, Buzz had what appeared to be a PR lady or “rep” with him dictating where he will be making appearances through the park. While en route to these various places, he would not stop to say hi to children. I guess he’s just that friggin’ cool on and off screen… Poor Woody. **
During our breakfast, Cinderella’s Fairy Godmother spent several minutes at our table. 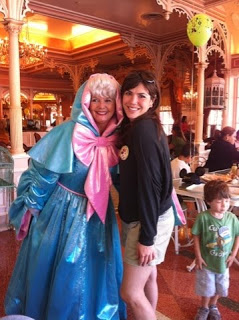 Look, I realize that the Fairy Godmother is equivalent to a D-List celeb in the character world, but when this broad comes to your table with a wand and wants to grant you a wish (after a year of divorce and a house foreclosing), you let her sprinkle her fairy dust wherever she damn pleases. My favorite part was when my mom (aka Mimi- to Baby-Ko) tried to make chit chat with her.
“So how long have you been ‘the fairy godmother’?”
“Oh,” she smiled and blushed, “I’ve been here for 55 yeaaaaaaaaars,” she said with a squeal. “I’ve been here since the very day they opened.” Perhaps, I thought. She does look kind of old. Until she added, “I live here.” Aaaaand scene.
Of course, the Fairy Godmother wasn’t the only one refusing to break the 4th wall. Later during the day, whilst in the Corn Dog Line, I saw Mary Poppins and Burt go rushing by towards the “cast doors.”
“Maaaaaaaaaaaary!!! Wait!!!” She wiggled her head.
“Waaaaaaaaaait!” I said running after her. “We want to meet you!”
“Parade,” she whispered and winked.
Trying to explain to Baby-Ko that Mary had to “get back to Jane and Michael Banks” all the while knowing that Mary was probably really on her way to smoking a cigarette and doing something naughty with Burt in the locker room, made me sad.
Then Baby-Ko got his “driver’s license” and I saw my life pass before my eyes.
He steered. I pushed the pedal. We both got whiplash. Remind me in 13 years to not be the one to teach him how to drive. 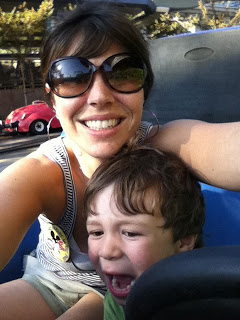 My baby became a BOY on Pirate’s of the Caribbean.
I was really on the fence about whether Baby-Ko could handle Pirates so I decided we’d wait until the end of the day to go on it just in case it scared him so much that he wanted nothing else to do with Disneyland. At first he was all excited about being on a boat inside a room/ cave that appeared to be “night night time.” But as the sounds got scarier and what looked like dirty pirate legs dangled above, the fear set in.
“Cover your eyes, Baby-Ko. It’s okay. It’s all pretend,” I said squeezing him tightly. As I looked down at him, worried that he will now have nightmares for the next year, I saw what both amazed and saddened me: He was covering his eyes…. with his fingers spread apart. He was scared but wanted to look. He was a real little kid.

This to me felt like a huge rite of passage. It’s all tumbles and thrills from this point on…. Sniffle sniffle….
Of course, then he licked the pole and I felt better.
Yes, on the merry go round, our very last ride of the day (which we may have accidentally snuck on to twice. Shh.), my beautiful and darling big boy took a big ol’ lick of the pole— The dirty- disgusting-public bathroom touching- turkey leg eating-corn dog licking-diaper changing-foreign disease-ridden pole. BLECH. I almost died.
“BABY-KO!!! Get your mouth off of there!”
“I liiiiiicked it, mommy!”
“I know. Please don’t do that again.”
He giggled, said okay, and pr
oceeded to rest his cheeks against it anyway.
I wish I could say he had a bath that evening… but alas, it was a long day…. 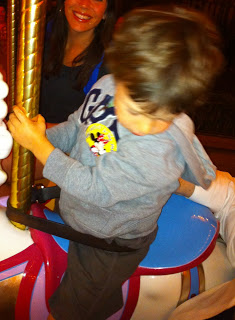 Today my boy turns 3. It’s hard to believe it. That just 3 years ago I had no idea what being a mom would be like…. I guess that’s the excitement and mystery of motherhood though…. Living in a castle that’s still full of surprises no matter how old you are and no matter how familiar you are with the territory…. Happy birthday, Baby-Ko. You truly make my life magical.

SOMETHING'S GOT TO GIVE