OOPS, I DID IT AGAIN

Yesterday, as I sat in a pediatric dentists’ waiting room, watching Baby-Ko play with toys that had inevitably been contaminated by swine flu and every other contagious disease, a weird thing happened: I felt bad for Britney Spears. Though this feeling was probably brought on by a lack of caffeine and the outdated tabloid magazines lining the walls, it was an odd thought that came over me. (BTW, Doctors: would it kill you to rotate in some US Weekly’s from the new millennium?I know Ben Affleck and J-Lo broke up. Please.) I remembered the gossip and stories that emerged when Brit started to go nutso and the accusations claiming that she wasn’t a fit mom– that her sons Jada and Presley (or whatever the eff their names are) at like age 2 had rotting teeth, and that she let them eat Cheetos and Coke…. I remember, at the time, (long before my own world became all things Baby-Ko) thinking she was a train wreck and those poor children with their cavity filled mouths. How could she be so negligent when it comes to their oral hygiene? What kind of a mother doesn’t enforce tooth brushing and allows snacks right before bed?!

Yeahhhhhh…..
So here I was, about to take Baby-Ko in for his first dentist appointment and all I could think was ‘thank god I’m not a celebrity.’ Thank god no one will leak to the press that Baby-Ko’s toothbrush went missing for a week and no one seemed to really miss it… or that the last thing in his mouth before bed time is Cheerios (better than Cheetos, I guess???)… or that if society didn’t judge him (and me really), I probably would let him have a pacifier until he’s 16 (he likes it. I want to give him the world. Is that so wrong??)
Forty-five, angst-filled, and sweaty minutes later (ever try holding a two year old down as a woman with teeth that, honestly, are a little too perfect tells said two year old that she “just needs to get rid of the SUGAR BUGS?!” Fuck the gym. Try that!), I, I mean Baby-Ko, emerged with a clean bill of health and what appears to be perfectly fine teeth. Despite the fact that I break nearly every dentistry rule in the book, Baby-Ko may stand a shot at having a decent future… orally speaking, that is.
Now equipped with a toothbrush shaped like a penguin and watermelon toothpaste imported from Japan that cost me more than my defrizz (Again, these bangs don’t just straighten themselves), I feel like I’ve been given another shot at Mommyhood. I dodged a bullet in that dentist’s office– What could have been a big slap on the wrist by the patient lady with too perfect teeth, turned in to a decent affirmation…. I’m not as bad as Britney. And while I realize I may be setting the bar kind of low by comparing myself to her, I think cutting myself some slack is better than becoming a psycho about this stuff. After all, in 33 years I’ve never had a cavity, braces, or a retainer (no matter how many times I showed up at the dentist with a paper clip in my mouth begging for one), so Baby-Ko might actually inherit some good goddamn teeth after all. If not, at least he’ll have his pacifier and his two life partners (Blankie #1 and Blankie #2) to cover up his mouth when he gets embarrassed…. his first day of college… 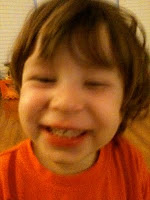