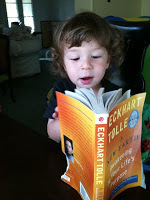 Despite the fact that Oprah swears by it, and the rest of the world drinks the same Kool-aid too, I’ve never been entirely convinced that there is a “seeeeecreetttttt!” While I’m all for “living my best life,” finding the time to motivate and go after what I want is a challenge in and of itself…. Um, which is why I could actually benefit from a self help/ find your inner blah blah blah book altogether….

After sharing a slew of anxieties with a friend, she suggested I read Eckhart Tolle’s “A New Earth: Awakening to Your Life’s Purpose.” She told me it will take some time to get in to it. That the beginning is “boring.” But then, “it gets good” and it all starts to make sense. Well… (a whole) TWO pages and SIX months later, my life’s purpose is still sitting on the dining room table…
But make no mistake. It is there …. that big, perfect, life of mine. I mean, it’s really there… And it’s good! It’s happy and shiny and oh, so very well rested. It’s skinny but healthy… It’s up in the hills in a gorgeous, but perfectly kid friendly house…. by the beach. It’s successful… creative and wealthy, and very on my own terms… out of my “home office…” But not sooo successful that I have to give up all that is near and dear and that my kid(s) never get to see me. Oh no, they see me. And it’s not just in the morning during Sesame Street and milk… or after work (during Sesame Street and milk). I’m actually there and present, AND I give them macaroni and cheese NOT because of my lack of time (and zest for all things plucked from the farmer’s market), BUT because they just want good ol’ Kraft (not even the 365 brand)…. and frankly, I’m so enlightened that I have come to terms with that and everything else that I cannot control…..
Okay. Fine. Let’s not get crazy. I mean even the Dalai Lama knows that some macaronis are better than others. The point is…. my life may “be there”, but it’s not going to start being unless I go after it.
Welll, shiiiit.
Who needs philosophers and wisdom.
It’s called Eat, Pray, Have a Two Year Old.
And if that ain’t the secret to “The Secret,” then I don’t know what is….. 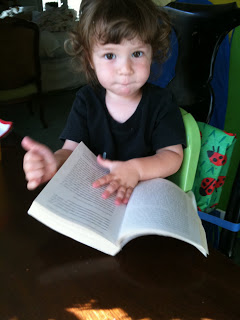