As we sat in traffic en route to Lucy’s 2nd Birthday party, I nearly bit my tongue off trying to stifle my urge to tell T-Ko to change lanes. He has a habit of staying in the right lane forever, and effing EVER, and it makes me insane in the membrane.  Trying to avoid a fight, and trying to challenge myself to my own little game of “who can be quiet the longest,” I didn’t say anything.  (Okay, well maybe I said one thing. But it was only because he really could have gone faster. It’s true that you can actually get a ticket for driving like my grandma. Seriously).  But once we made it to the big indoor play area and got to “partying”, “parking lot T-Ko,” as he is affectionately referred to in our house, was forgotten.

Aside from the giant bouncy slide (that made me realize I could use a more supportive bra), the highlight was definitely watching Baby-Ko scoot around in the Little Tikes Cozy Coupe Car.  He looked so cool behind the wheel.  First he stopped, to pick up Lucy…. 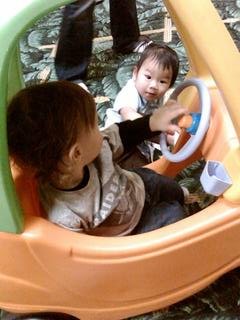 Such a gentleman.
Then she climbed in (on top of him really) and literally took control of the wheel… 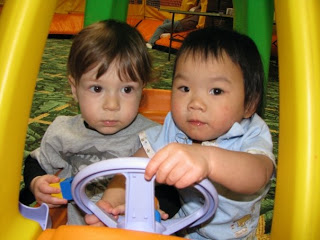 Unlike his mommy, Baby-Ko was not a back seat driver and was happy to slowly cruise the play area… Until they announced it was time for pizza. Then he was all about the fast lane…