I posted a while back about how I used to list all the things I would NEVER, gasp, NEVER do when I had a child of my own.  Well, those with children know how ridiculous that romantic little notion is… Especially, when you’re on “vacation” with said child and said child happens to be interested in everything he shouldn’t be and wants to be everywhere he shouldn’t and can’t be.  SO, what do you do? You go in to SURVIVAL MODE. You do what you can to get by. You make do with what you got and you break all the rules and become a mom that you never, gasp, never thought you would be.

Yet, here you are. Sitting on the floor of a WINERY. Tempting three toddlers with cookies, books and goldfish, while you sip your wine trying to detect hints of chocolate, berries and pepper.  (This photo happens to be of one of the other mommies on the trip who I’m pretty sure never thought she’d be sitting on the floor of a winery trying to entertain to three toddlers as she sips Pinot Noir either). 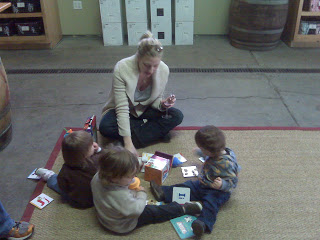 I mean, there weren’t very many people in the winery and we only did the short tasting (4 wines to be exact), and we of course picked up the goldfish crumbs before we left… At least that’s what I keep telling myself.
And then there’s the ride home. The SEVEN HOUR ride home.  The ride home I used to tell myself that would be full of singing, reading and “my father owns a grocery store and in it he sells…”  The ride home I swore that would never, I repeat never involve a movie or  DVD… What kind of parent would buy a car that promotes television watching, or bring along a device that would turn their children into bumbling idiots!?  Not me. Noooo. NEVER!  Well guess what? Apparently, my 15 month old could give a shit what my father’s selling and would like to watch “Signing Times” 18,000 times in a row. Yes, that is what he would like and god help everyone in the car and on the road for that matter too, if he doesn’t get his way. 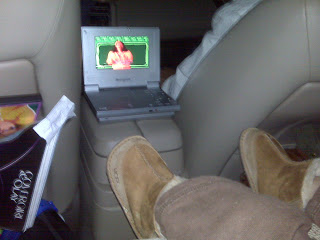 I mean, it was a little screen though. I didn’t have the volume up very loud. He’s now very interested in the colors of the rainbow… At least that’s what I’m telling myself.
And as my Papa Ralph used to say…. Whatever works.

WORDLESS WEDNESDAY: INTO THE WOODS