It’s finally here. Less than 24 hours away from Election Day. I’m so excited for all the campaigning and shit talking to end, and ready for a new leader. As incredible as it’s been to witness  how politics have become mainstream and “funny,” I’m ready for things to get serious. Sure, it’s been fun to see and a great way for candidates to reach the young voters… from the “Don’t Vote” video to Sarah Silverman’s “The Great Shlep” to Tina Fey’s dead on spoof of Sarah Palin….  but enough is enough. It truly is TIME FOR A CHANGE.

If I were a McCain supporter I would have been completely turned off by his appearance on SNL this weekend. He looks like a friggin’ corpse… Like a wax version of the dude from “Weekend at Bernies.” Maybe its me, but I really don’t see how self deprecation and joking can work to your advantage, just days before the election, when you and the moose loving dumbshit you’re running with are behind in the polls? I get that politicians go on these shows to seem more relatable, more “main street.” But enough. We’re on to you. You’re not comedians and you’re appearance doesn’t make me think “wow, I’m just like you ” or buy that you are “just like” the Joe Six Packs and Hockey Moms of America….

Speaking of Hockey Moms, I am certainly no comedian, but boy, did I have fun playing one (playing one…) on Halloween. 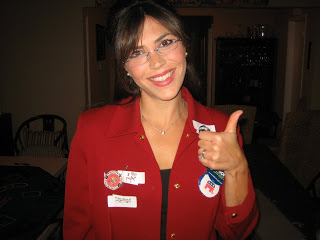 And by the way, I think I’d be a better candidate…