Like most babies, mine is OBSESSED with DOORS. Open. Close. Open. Close. Kid could do it all day long. And, of course, now that he can pull him self to standing, and actually stay there for a while without falling, he now loves DRAWERS too. Open. Close. Open. Close. Well, it goes without saying that a tiled bathroom and kitchen with an old stove that constantly omits heat (and probably gas for that matter), is not exactly a safe play area for a child. SO, when my Nana asked me what Baby-Ko might like these days for his first birthday gift, it was a no brainer: A kitchen. He needs a play kitchen.

He’s played with the Step 2 kitchen at various playrooms and friends houses, and he LOVED it. The drawers and cabinets, the refrigerator, the oven, the “microwave”….Open. Close. Open. Close. The kid was in heaven. BUT when I pulled the box out of the garage to assemble the kitchen, T-Ko was less than thrilled. DH was over and the two of them were cracking jokes left and right. 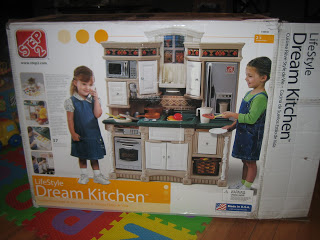 “Uh, babe. Do you see the pictures on the outside of the box?”
“I know. It’s big, but I’ll put it together.”
“No. Not that. This is for GIRLS. There are two GIRLS playing with the kitchen,” he said.
“Now I at least know what to get him for his birthday,” DH chimed in. “An apron.” I laughed.
“Dude, seriously. You’re gonna make the kid gay.” T-Ko said (knowing that this is actually impossible).
“That’s ridiculous and you know it,” I said and pulled out the drill gun. (Anyone catching on to the irony here?)

For a second I did second guess myself and wondered if T-Ko and DH were right… That maybe a kitchen was too “girly” and that maybe he should be playing with a dumpster or a truck (which he has and plays with). But that’s ridiculous. Bobby Flay, Wolfgang Puck, Gordon Ramsey… Straight Men. Tough Men. Top Chefs. I’m perfectly fine with Baby-Ko in the kitchen. In fact, I’d be thrilled if he were a chef.

And as I sat on the floor, IN A DRESS, with a drill gun in my hand, while my husband actually flipped back and forth from the Food Network to the Chabad Telethon, I realized the whole thing was ridiculous. If playing with a kitchen makes Baby-Ko gay, then I guess that makes me a lesbian…. 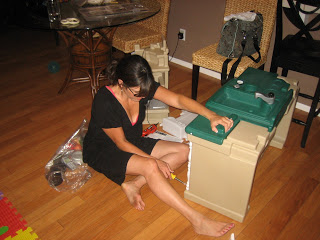