When I got home from Whole Foods tonight, I found T-Ko and DH doubled over, laughing.  They had the Olympics on when I left and I figured that one of them had just made a crude joke about the synchronized divers.

“What’s so funny?” I asked.
“J-Ko…” DH said with tears running down his face, “You’ve got to see this.”
T-Ko rewinds the DVR and shows me a clip from Bob Costa’s post breaks. He was covering the U.S. women’s beach volleyball game against Japan from Sunday.
“Watch, watch,” T-Ko says. He turns the volume up as Bob tells how when Kerri Walsh went up for a block, her WEDDING RING came FLYING OFF. 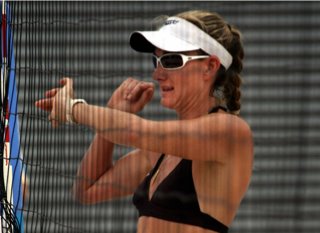 “Why is she wearing her wedding ring during a match?” I ask. The clip goes on and shows how when the match was over, a team of volunteers tediously searched through the 17,000 ton SAND court, trying to find her gold wedding band.
“Where the hell is she?” I ask, wondering why Walsh, who was apparently more distraught over losing the ring than defending the block, wasn’t on her hands and knees looking frantically for her beloved ring.  I would be going CRAZY trying to find it. The match is over! Unless she’s competing in another event, doesn’t it seem like she should be the one digging through sand?
What seems even crazier is that when volunteer Sung Zhendong did finally FIND the ring, (and he graciously returned it to her the following day), Walsh gave him an AUTOGRAPHED VISOR, some OLYMPIC PINS, and a PAT ON THE ASS.  A. Pat. On. The. Ass. Seriously??? That’s it? I mean, I know the dollar isn’t worth much these days, but how about a little reward or at least a photo opp? Nothing! I mean, Olympic friggin pins?! If they’re anything like the kind that my mom bought me on the corner of Figueroa and Exposition during the 1984 Olympics from some guy hawking cheap chatchkes, I can tell you they’re not worth much.
I don’t know. The Olympics are supposed to be made up of super heroes. People that break world records. Role models. GRACIOUSNESS.  I just think she could have shown a little bit more gratitude. “Kvel” over the guy if you know what I mean…
That said, I am now quite interested in Olympic Beach Volleyball. I thought that the swimmers had the best butts in Beijing, but the volleyball players definitely take the gold in this area….
And with that, Mommy is soooooo dragging her ass to Tae Bo tomorrow.
Without my ring on of course…