Well, what do ya know. I’m in to week FIVE of my four week diet. Whatevs. Shit happens. The good news is that I’m highly motivated now and I have actually lost a few pounds. The bad news is with the Olympics on all day and night, I feel like a sloth when I look at all these crazy ripped bodies. I mean, I don’t want to be ripped like the freaky little gymnasts with voices like Minnie Mouse, or like the female swimmers (frankly, having shoulders that broad would really fuck up my style). But I WOULD like for one day in my life, just to know what it’s like to have a riiiiiiiipped abdomen. One like Michael Phelps. Specifically, that PELVIS “T” that he has. He should win a gold medal just for that T. 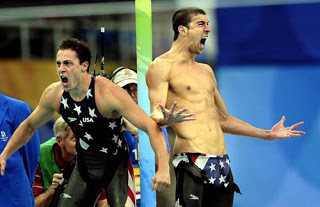 I know he spends like 8 hours every day swimming and training, but still, his daily diet is so off the charts, it’s almost unfair.  I read today that his typical daily diet consists of: